If you have a jailbroken Apple TV, the rule is you never, ever, preform an over-the-air (OTA) update directly on the device. We didn’t need @nitoTV to tell us that is a guaranteed recipe for ‘bricking’ your device, but Kevin Bradley–also known as nitoTV, the developer behind the nitoTV frontend for the Apple TV–posted the reminder on Twitter this afternoon. Luckily it’s only a “soft-brick”, a reversible error in the firmware that can be easily fixed by putting your device into DFU-mode and restoring a backup of the proper firmware through iTunes or RedSn0w. 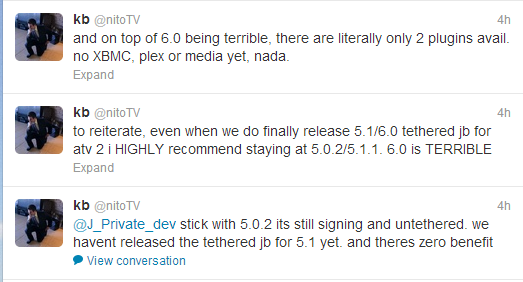 nitoTV’s advice: Don’t bother with iOS 6 on the Apple TV 2.

The advice was prompted by news that iOS 6.0 (also known as the 5.1 update) was bricking Apple TVs, which Bradley speculated may have been caused by jailbreakers attempting to perform an OTA update directly to their devices. The developer mentioned that if you want to update on a jailbroken Apple TV, you have use iTunes–however, he also suggested that you shouldn’t update at this time.

Now, there is a working jailbreak for the 5.1 update on the Apple TV 2 through RedSn0w, however it’s a tethered jailbreak, which means the tethered device can’t boot independently of a computer–this could be a hassle if the power is ever cut to your precious AppleTV. It also isn’t currently compatible with many plugins, such as FireCore’s aTV Flash software.

Instead, it’s recommended you stick to the previous version (5.0.2), as it’s still being signed by Apple (so you can freely downgrade to it) and the jailbreak for that firmware is fully untethered. The 5.1 update doesn’t bring any new features to the Apple TV, so if you bricked your device or upgraded, you might want to get the old firmware back while you still can. 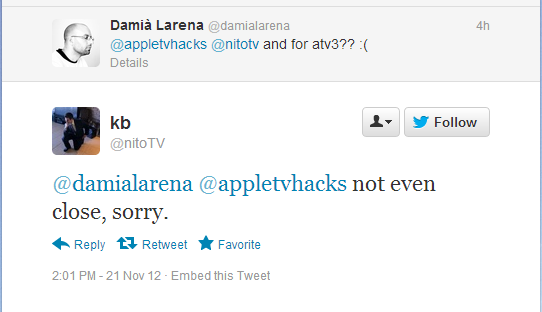 Unless a hardware exploit is found, it’s unlikely we’ll see an Apple TV 3 jailbreak in the near future.

Finally, for those of you waiting for the status of the Apple TV 3 jailbreak: “not even close, sorry.” This is likely due to the fact that the AppleTV devices need to run fewer services in the background and are generally more secure–the main reason the Apple TV 2 was jailbroken was because it was vulnerable to the same SHAtter/LimeRa1n hardware bootrom exploit as the other A4 devices.

Did you accidentally update your Apple TV? Share your thoughts in the comments section below.