Ever find yourself shaking your iPhone, iPad, or iPod touch madly to get it to rotate? Do you wish your phone would automatically ‘know’ to switch into the upright position when you insert it in a dock? A new tweak called UIRotation For Activator allows you to assign gestures and other Activator signals to screen rotation. 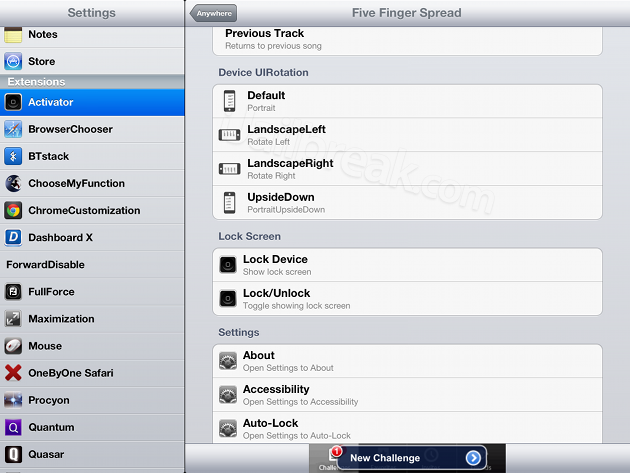 As the name implies, the tweak is a plugin for Activator. Once you install the tweak, the you’ll be able to set the gestures under Settings -> Activator. Device UIRotation doesn’t only provide settings for portrait and landscape, but all 4 rotations of the screen, though you’ll probably stick to Default and LandscapeLeft. Unfortunately not all Activator gestures can be set to activate Device UIRotation, they seem to be limited to gestures that can be done anywhere, like screen dragging, button presses, and connecting the phone to power.

The only major downside of Device UIRotation is it does not ignore rotation lock, meaning it would be a hassle on the rare occasion where you want to rotate an app into the landscape position while holding the device in portrait mode. The software would be improved if the deliberate gestures could either override the rotation lock or disable the accelerometer.

How would you use UIRotation? Share your thoughts in the comments section below.