When Springtomize was first released it had hundreds of people raving about it. This is because Springtomize integrates numerous Cydia tweaks into one simple and easy to use Cydia tweak. Meaning, for example, you can customize the Statusbar, folders, dock, app labels and so much more all. With this in mind, it is without a doubt that Spingtomize is a great Cydia tweak, but what disappointed a lot of people was the fact that it was not compatible with the iOS 5.0 firmware; that is until now… 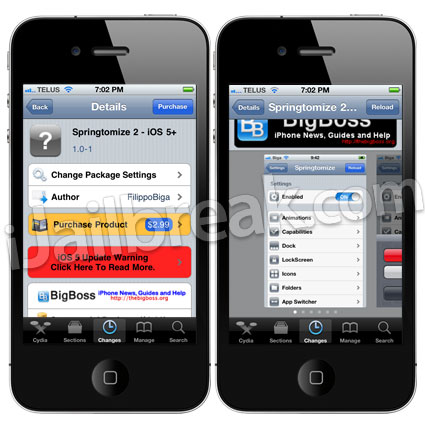 You can download Springtomize 2 from the BigBoss repo for a price of $2.99. Let us know what you think about the Springtomize 2 Cydia tweak if you decided to purchase it for your iPhone, iPod Touch or iPad in the comments section.