Be honest: how often do you make voice calls with your cell phone compared to texts? Texts are easy to send and they can be read discretely at any time. Aside from voice calls, they are the only form of communication guaranteed to work between (almost) any cell phone. So why is the iPhone’s native SMS client so barebones? You have to select each individual message you want to delete, anyone using your phone can see your most private messages, and if someone texts you while you know you’re going to be away, they only get silence. 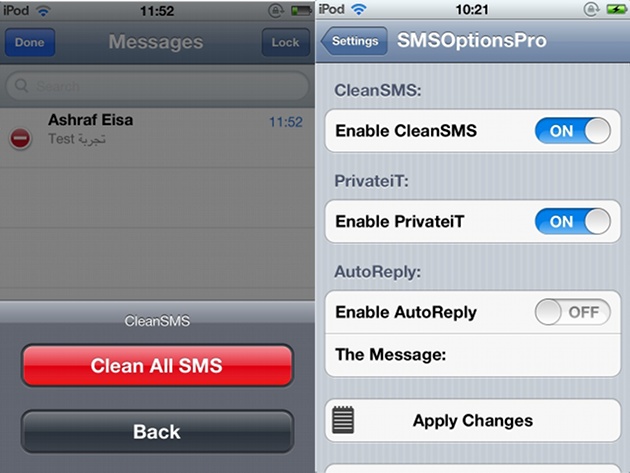 SMSOptions Pro in iMessage and the Settings menu.

The Tweak: SMSOptions Pro is a text messaging tweak that currently contains three options for expanding the iPhone’s SMS and iMessage functionality: 1) The tweak can enable a “clear all messages” button in each conversation window, allowing users to delete conversations wholesale. 2) The PriviteiT feature allows the user to hide private conversations. 3) Users can also leave an autoreply message, for responding to SMS texts while the user can’t respond.

Caveats: The tweak is a mixed bag. On the one had I’ve been looking for a utility that includes automatic ‘away replies’ for text messages since Away Text stopped updating. On the other hand, the mass message erasure and privacy options have already been implemented better in BiteSMS. The edit -> unhide button doesn’t seem as secure as just password protecting the whole app, but the option is there if you want it.

Where to find: SMSOptions Pro is available in the ZodTTD & MacCiti repository for $0.99. It’s cheap enough to justify purchasing just for the AutoReply feature, though you may want to look elsewhere for the privacy settings.

Alternatives: BiteSMS already includes a Delete Conversation button and a fully functioning password system, as well as overlay windows for QuickCompose and QuickReply that can be activated at any screen. The only feature lacking is the automatic away reply.

What do you think of SMSOptions Pro? Share your thoughts in the comments section below.