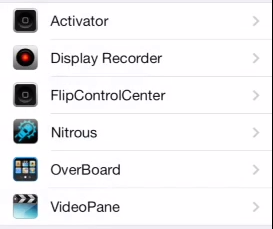 With Cydia being updated with support for iOS 7 and Mobile Substrate soon to follow, it won’t be long before we start seeing popular tweaks being updated for iOS 7 along with new tweaks being released to take advantage of some of the major changes brought about in iOS 7 like the Multitasking Switcher and Control Center.

Ryan Petrich was one of the first developers to tease updates for existing tweaks and even showcase a new tweak. The quick 30 second video he shared shows off Display Recorder, Activator and even a new tweak called FlipControlCenter.

By the looks of it FlipControlCenter isa tweak that will allow you to customize the shortcut toggles found within the Control Center at the very top of the menu. From the video preview you will be able to customize the order of the toggles and even add more than the default allotment of 5 which are accessible by scrolling.

Dug this out of cold storage today… http://t.co/wMEFun86ox

It’s certainly exciting to think of all the great tweaks that will be coming out shortly for your Jailbroken device running iOS 7. Who is excited for what Ryan Petrich “dug out of cold storage” today?