A new Cydia tweak is now available that lets you control the brightness of your iPhone, iPod Touch or iPad using Activator actions. This can be quite useful for those who like to constantly adjust their brightness. 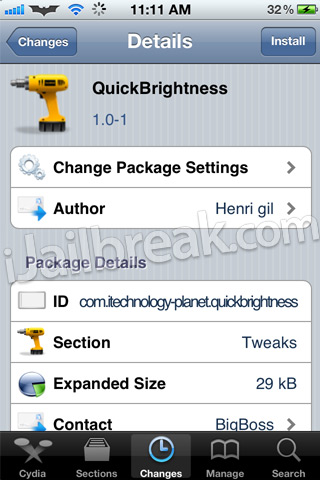 Instead of launching Settings and controlling the brightness levels, or using automatic brightness, one can just swipe up or down to control brightness levels from anywhere on their iOS device. QuickBrightness doesn’t bring anything new to the table and there have been similar tweaks with such functionality released, but this one does it in an easier way. Just assign an Activator function to the tweak and you’ll be able to control your device’s brightness from anywhere with ease. The Activator actions can be assigned from the Settings app.

When you use the Activator action, a pop-up appears with a Brightness slider. QuickBrightness is available for free in the BigBoss repo and is a real simple and useful tweak. Give it a shot!