If you haven’t heard of the Pebble Smartwatch then I would be surprised! It was one of the most successful Kickstarter products, raising over $10 million and has garnered some pretty good reviews so far. Pebble is one of the first customizable watches that allows you to download new watchfaces, use sports and fitness apps and get notifications on your phone. In case you missed our coverage on Pebble, check out the video below.

Pebble will connect to your iPhone 3GS, 4, 4S, 5 or any iPod Touch with iOS 5 or iOS 6. It is even compatible with any Android device running OS 2.3 and above. If you were one of the lucky backers of the Pebble project on Kickstarter and have in your possession a Pebble, used with an iOS device then you are in luck! A Jailbreak tweak by the name of PebbleSiri was released that allows you to control Siri from a Pebble smartwatch. 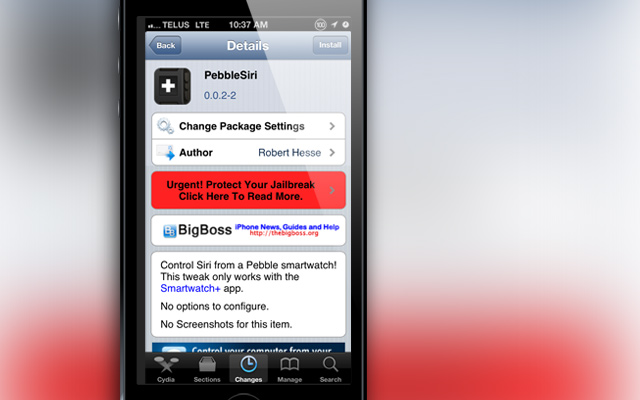 The developer notes that the tweak only works with the Smartwatch+ app, and there is no options to configure or icons added to your homescreen. You simply install the tweak and you can begin controlling Siri with Pebble.

PebbleSiri can be found in the BigBoss repo for free. If you have a Pebble Smartwatch be sure to let us know how the tweak works in the comments section below.