iOS 6 introduced dozens of little features, one of which being the ability to set any song as an alarm bell. Unfortunately Apple didn’t include an option to disable the vibration on the alarm. If you have your iPhone lying beside your bed on a nightstand, you might hear an unsettling buzz over your wakeup tune as your phone rattles against the solid surface. In some cases, it can even cause your phone to fall, possibly damaging it.

If you’re using iOS 6 on an iPhone 3GS or 4 (or if you’re a lucky developer using the super-secret Failbreak), you can disable the alarm buzzing with a tweak called NoVibratedWakeup. Now, you might be wondering “Why would I install a tweak to disable vibration on my alarms when I can just disable vibrate altogether from the Settings menu?” The beauty of NoVibratedWakeup is that it disables alarm vibration without disabling vibration for other notifications, like texts and calls, which means you don’t have to fiddle with settings to restore your covert in-pocket alerts.

Samball, the developer for NoVibratedWakeup accidentally includes the iPad and iPod Touch  in the tweak’s description – which is a bit odd considering those devices lack a vibration motor to begin with, making the tweak for disabling that function unnecessary  While there are currently no settings for NoVibrateWakeup–which is for the meantime a ‘install to activate’/’uninstall to deactivate’ tweak, there may be a build with more options available in the near future, hopefully with alarm-specific toggles. 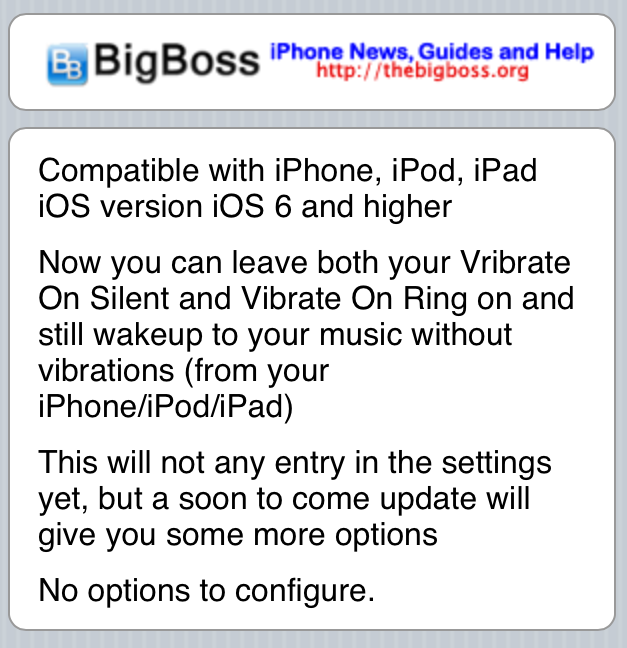 It probably won’t break your iPad, but why install a tweak on a device that doesn’t need it?

NoVibratedWakeup is a FREE tweak for iOS 6. It can be found in the BigBoss repository on Cydia.

Which song do you set to wake up to? Share your thoughts in the comments section below.