The update for MobileSubstrate we have all been waiting for has finally arrived. Saurik has tweeted this morning that he has pushed an update for Substrate bringing it to version 0.9.5000 that brings support for iOS 7 and ARM64. He has also renamed MobileSubstrate to Cydia Substrate, which is now more fitting of a name.

This is a big deal because it means tweak installations on all devices running iOS 7 should now be a lot smoother. Furthermore, it will bring tweak compatibility newer devices with a 64-bit A7 chip like the iPhone 5S. 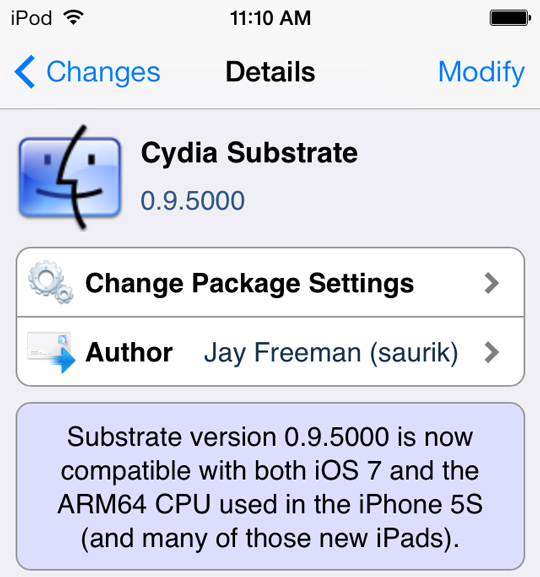 Saurik did note, however, that even though Cydia Substrate is compatible with 64-bit devices now it is up to developers to recompile their tweaks for ARM64. Meaning the ball has essentially been dropped in the developer’s court and it is up to them to provide updated versions compatible with A7 devices.

For mainstream tweaks this won’t be an issue, but for tweaks that are less popular and less actively maintained it may be awhile until they are updated.

You can update to Cydia Substrate 0.9.5.000 by refreshing your sources on your Jailbroken device. Also remember if you have BootStrap installed remove it before updating.

Let us know how things are with this new version in the comments section.