There has been some cool free Cydia tweaks being released lately, and today another one has joined the ranks.

Introducing the Messages Conversation Photos Cydia tweak. What this tweak does is add contact photos to Messages conversations.

Now before you go saying things like “there is a ton of tweaks that do this already!” you will be glad to know Messages Conversation Photos implements the contact photos in a slightly different way. They resemble Facebook Chat Heads in a way and make the stock Messages app look way better as you can see in the image below. 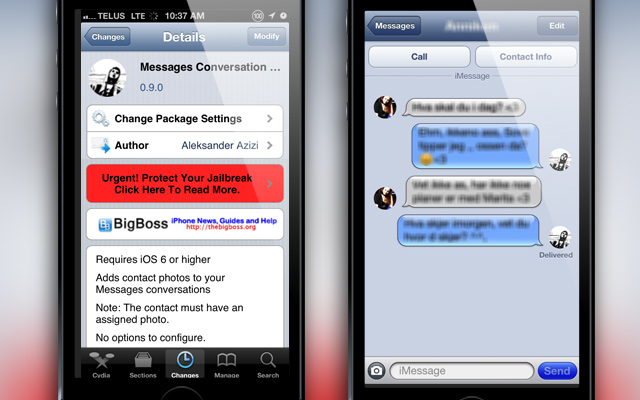 Contacts that don’t have pictures just don’t show up as normal messages, and the tweak works great on my iPhone 5. This tweak requires the iOS 6 firmware or higher and does not have any settings to configure. You simply install and start enjoying it.

If you are interested in the Messages Conversation Photos Cydia tweak you will be glad to know it is available for free in the BigBoss repo. Let us know what you think of the tweak in the comments section below.