Following the release of The Quick Brown Fox Cydia tweak that brought about extended functionality to the keyboard, we have another tweak that has been released to give the keyboard even more features. The tweak is called Keyboard Control Pro and in a lot of ways it is similar to The Quick Brown Fox, but it does have some extended functionality that makes it feel like a Pro version.

Just like The Quick Brown Fox, Keyboard Control Pro includes Auto Twins, Auto Space and Jumping keys. With Auto Twins enabled when you insert brackets they will be automatically closed. This applies to ‘(), [] and {}.’ Thanks to Auto Space you will be able to configure any key on the iOS keyboard to automatically insert a space when the selected key is pressed. Finally with Jumping Keys enabled you can say goodbye to having to switch back to the alphabetic keyboard when typing symbols or special characters. With this option you are able to configure keys that will automatically take you back to the alphabetic keyboard upon being pressed. 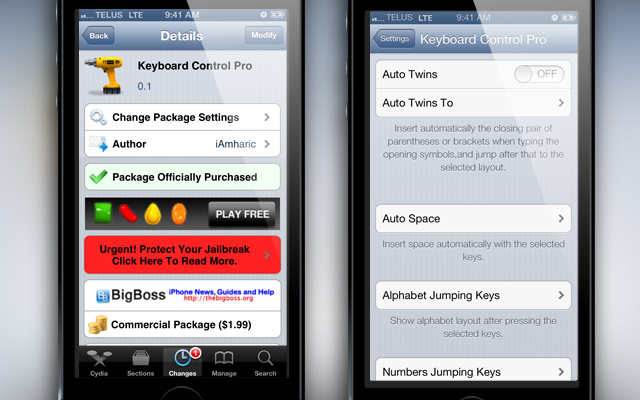 Keyboard Control Pro takes it a step further and introduces Number Jumping Keys and the ability to configure Quick Output shortcuts. You can configure a custom double tap spacebar behaviour, make it so whenever you long press the @ sign your Twitter handle will be entered and my all-time favourite — Email Pilot. This feature makes it so whenever a text field comes about requiring you to enter an email address it will automatically enter a pre-defined one.

The only problem of course is if you use multiple email addresses for various logins, then this feature is probably of little use to you as it will become more of an annoyance.

That’s about everything included with Keyboard Control Pro. It is available in the BigBoss repo for a price of $1.99.

So, is Keyboard Control Pro the ultimate iOS keyboard Cydia tweak? I would have to say no. It is a useful tweak, but there just isn’t enough functionality to make it stand out over The Quick Brown Fox to make it worthwhile. If it had a price tag of $0.99 I might reverse my stance, but at $1.99 I find it too steep for a tweak of its caliber.

Be sure to let us know what you think of the tweak in the comments section below.