Saurik, creator of Cydia, has updated the Apple File Conduit package to support the newly released iOS 8 jailbreak. What is AFC you ask? It is what allows iTunes and iPhoto to access (read/write) media on your iOS device via USB. Normally you cannot access all the files on your iOS device as AFC keeps it in a jailed state, whereas with AFC2 you get complete access. In previous jailbreaks, this was known as afc2add, but is now called AFC2 on iOS 8 and later. 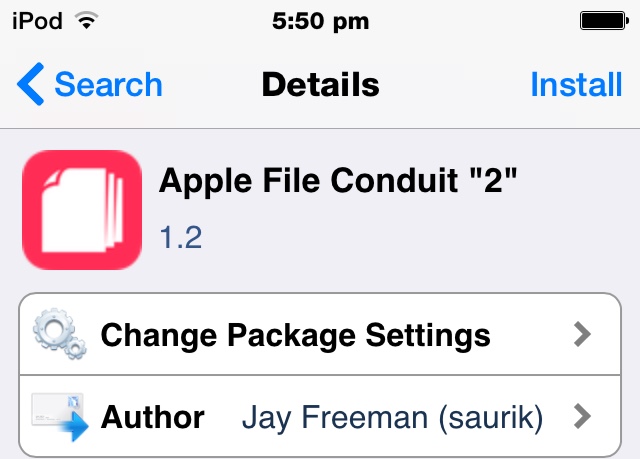 Users who have jailbroken their iOS device on iOS 8 or later can install AFC2 from Cydia. Simply search for Apple File Conduit 2 on Cydia and install the package. After installation, you will be able to view/edit/move all content on your iOS device using tools such as iExplorer, iFunbox etc.

Of course, it’s not all rainbows and butterflies. As Saurik explains, giving full system access via USB has caused security concerns and it is advisable that you think twice before installing AFC2.

Nevertheless, it’s your call, whether you want to install this package or not. It may also cause installation issues for some, but it installed fine on my iPod Touch 5G. Let us know if you will installing AFC2 on your iOS device.