We have been seeing some neat Cydia tweaks released recently such as BuddyLock and today another one joins the list by the name of InstaLauncher.

Just what does the InstaLauncher Cydia tweak do?

Well, InstaLauncher is a great new app launcher for your iPhone, iPod Touch or iPad that allows you to launch apps in “less than 500 milliseconds” according to its developer. With an Activator action of your choice you will be able to bring up a launcher with every app (and more) you have installed listed in alphabetical order. There is also an area for recently launched applications and of course a configurable favourites section. 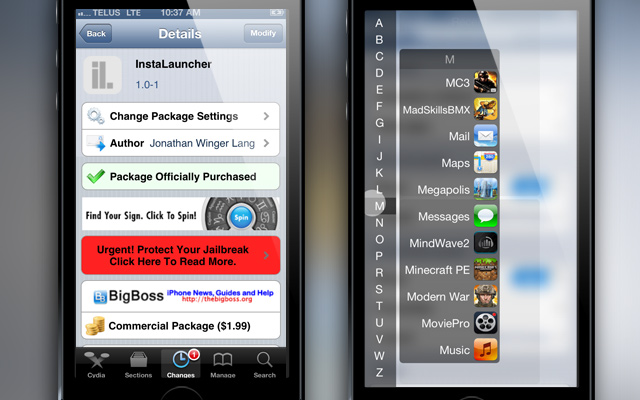 I have tested the tweak out and can confirm it works as advertised. It is actually a pretty awesome idea. I set the Activator action to shaking the device and it will bring up the panel you can see in the image below where I can easily have access to all of my applications.

There is quite a few preferences for the tweak as well such as the ability to hide apps, change the layout style, configure favourite applications and much more.

If you are interested in InstaLauncher you can find it in the BigBoss repo for $1.99. It is compatible with both the iPhone and iPad running iOS 5 / iOS 6. Let us know what you think of the tweak in the comments section below.