Last week we shared with you guys a preview of the HipJot Cydia tweak which brought the powerful custom keyword capable of typing speeds of up to 120WPM to iOS. For those of you who missed the preview, the keyboard itself in HipJot is similar to that of Swype, in that you can swipe your fingers over the keyboard rather than tapping on each letter.

The tweak has since been released in beta form over at the following repo: cydia.myrepospace.com/jormy. Once you add the tweak into your sources you will be able to navigate into the repo listing page and find a tweak called “nin.” It’s the only tweak in the repo, so it won’t be hard to find.

After you install the tweak, respring your device and you can begin learning how to use the HipJot keyboard. It definitely will take some time to get used to it, as it is a completely new typing experience. Due to the fact it is in beta you will also encounter some bugs like the keyboard not working in all locations in iOS. 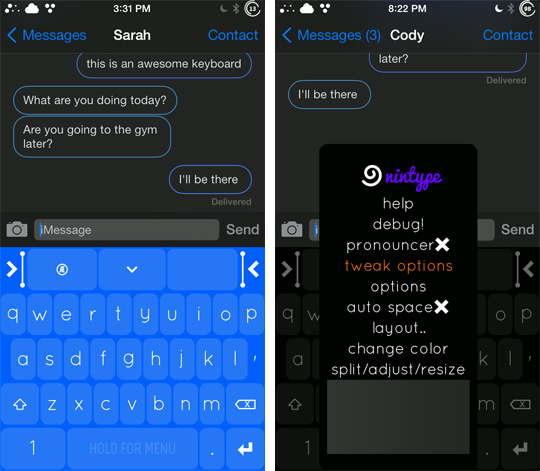 The keyboard is very customizable and you can change the colors, change the layout, resize/realign and much more. The tweak’s preferences can be brought up by tapping and holding the space bar.

Not all the preferences work at this time, but for the most part it’s a fully functional tweak. Let us know what you think of the HipJot keyboard in the comments.