Do you lend your iPad to your kids, but don’t want them mucking around with your iMessage or Email accounts? Do you want to prevent your drunken friends from fooling around with Settings or installing prank Cydia tweaks to mess with you? Folder Passcode won’t find you better friends, but it is a Cydia tweak which will allow you to set a passcode to prevent designated folders from being opened on the SpringBoard.

Setup: After installing Folder Passcode from Cydia, you will need to respring your device before the tweak can take effect.

Warnings and Caveats: Folder Passcode seems like a good idea, but is easily bypassed in two ways. Since it relies on MobileSubstrate, all you need to do is enter safe mode to get at the apps unimpeded. You can also use Spotlight to search for the apps, as Folder Passcode only prevents users from opening folders. This won’t be enough to prevent anyone who understands how 99% of Cydia tweaks work from getting at your apps, but it should deter children, pranksters, and snoopers.

Another issue is the the passcode dialog, which looks like the iPhone’s native password screen. The screen is actually an overlay formatted for the iPhone’s display, which means that if you run Folder Passcode on an iPad, the overlay will only appear in a corner of the screen, which is annoying. 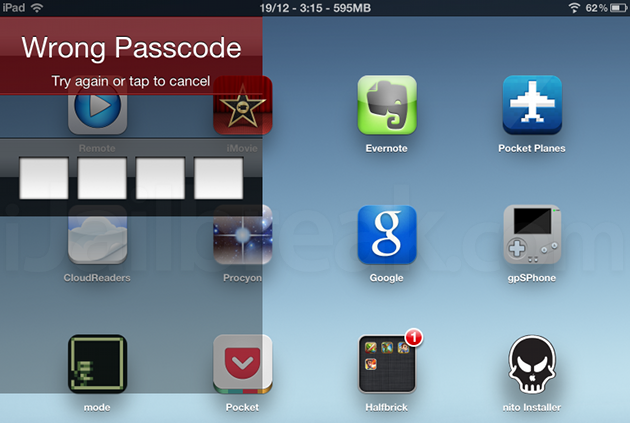 Folder Passcode looks a lot better on the iPhone.

Where to find: Folder Passcode is a free Cydia tweak, available in the default ModMyi repository. All you need to do is search for it.

Alternatives: FolderLock ($1.59) is a similar Cydia tweak which can not only set passwords to folders, but is also capable of prevent the apps within these folders from being launched through Settings, Spotlight, or the multitasking Switcher–though this also relies on MobileSubstrate.

Would you use Folder Passcode to keep your folders secure when you lend out your phone? Share your thoughts in the comments section below.