FaceTime is a feature that Apple has implemented to change the way we communicate with each other; by adding onto the normal calling functionality present in most smartphones. Instead of just hearing ones voice while calling someone, you can share the luxury of seeing who you are calling, with the added ability to share your surroundings. This makes calling someone much more personal and “fun”. As FaceTime has become a clear hit Apple has implemented FaceTime on almost all Apple products including Mac computers.

The only letdown I would say about FaceTime is that it cannot be used over a 3G network. To use FaceTime by default you must be connected to an active Wifi connection. If you have ever wondered if it was possible or not to use FaceTime over a 3G network, on your iPhone for example. You will be glad to know this is defiantly possible on Jailbroken iDevice’s. 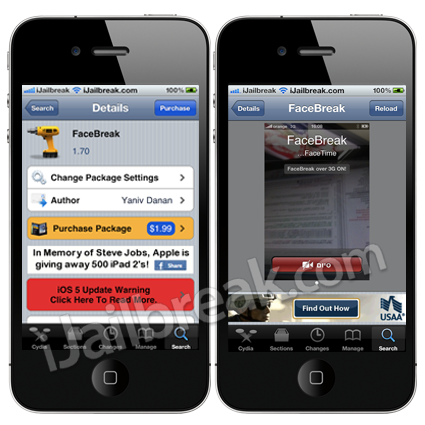 Let us know if the FaceBreak tweak has enabled you to use FaceTime over a 3G network while running the iOS 5.0/iOS 5.0.1 firmware in the comments section below…