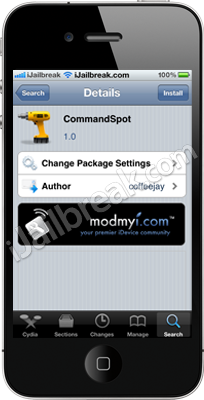 CommandSpot is a newly released jailbreak tweak that gives more power to the iOS spotlight search. With the help of this tweak you can launch apps such as Twitter, Facebook etc, respring your device, search Google and more. Some time back, we told you about another such Cydia tweak called MySpotlight, which has similar functions. But, I would prefer CommandSpot over MySpotlight because this app can do so much better. Here’s a list of commands that you can execute using Spotlight search:

Now, that’s a lot of commands don’t you think? It makes certain things very easy and much quicker! CommandSpot is available for free in the ModMyi repo. Try this tweak out and let us know your opinion about it in the comments section below.