Anonysend released an iOS app for their email spoofing service on Cydia today. Anonysend describes itself as the “best app to prank your family and friends with,” but you should use the app responsibly because 1) You are a decent human being who will not use spoofed emails to hurt other people, and 2) The Anonysend service logs your IP Address along with your emails. 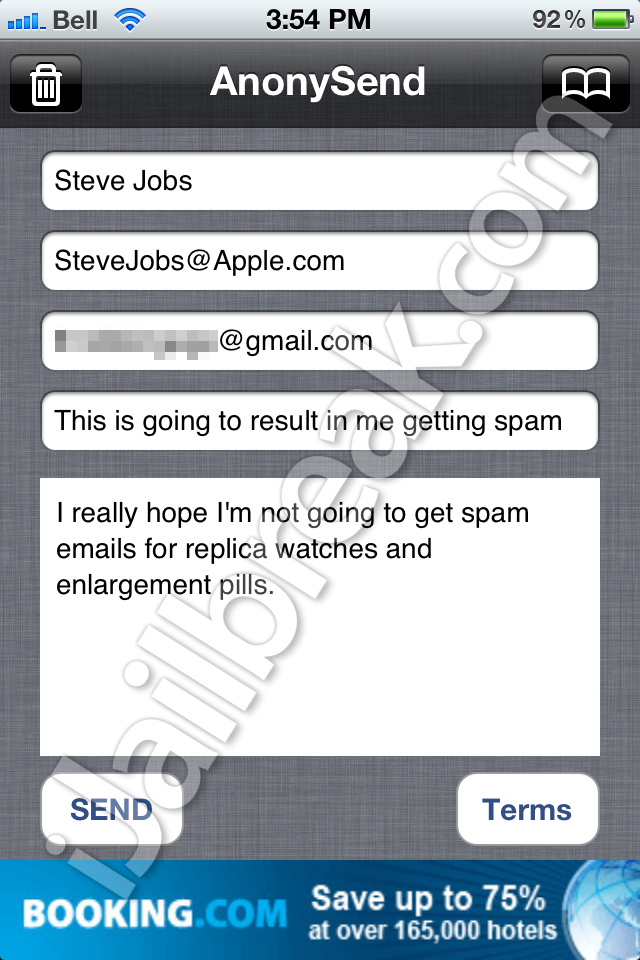 It was only AFTER I already sent my first message that a notification pops up, warning that the developer is “required by the law to disclose any information [he] might have if requested by authorities.” Gee, it’s a good thing I sent that first message to myself. To compensate Anonysend made the notification pop up three times. I got the impression that this isn’t the most stable app in Cydia.

Despite the odd glitch, Anonysend works. I sent a message from “Steve Jobs” to my expendable gmail account, and the spam filter did not catch it. It showed up in my main folder with the rest of my emails. The downside is that if I were to reply to the email, it would go to Steve Jobs. Anonysend is strictly a one-way affair.

Who is Anonysend for? If Anonysend logs information from its users, it’s not really anonymous (or even private for that matter). While anonymity can be abused, it also has its uses, such as allowing people the freedom to voice opinions that may be unpopular or which may be physically discouraged by a repressive regime. Because of this the Anonysend app is useless for anything but playing pranks on gullible friends.

If you’re looking to send a harmless prank to a friend, maybe you can find a use for Anonysend. It’s FREE and available under the BigBoss repository in Cydia. Although if you really need to be anonymous, this app isn’t going to do the job alone.

Are you going to prank anyone with Anonysend? Anonysend logs the emails anyway, so you might as well post about it in the comments section below.