Today a new and simple tweak was released into Cydia called StartDial. This Cydia tweak very simply will make it so whenever you start your Phone.app, you will be brought to the keypad screen first. Now for me this Cydia tweak would not be useful, because unfortunately I am one of those people who rely on my iPhone’s contacts when calling someone. However if you are someone who memorizes phone numbers, I can see this Cydia tweak being quite useful. 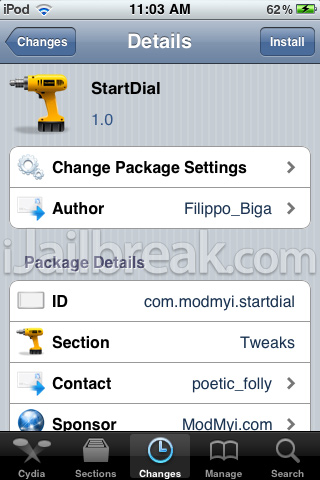 Personally I think this Cydia tweak could be made a lot better, if it provided options to allow users to pick which tab they wanted to start by default when they launch the phone.app. Hopefully the creator of this new Cydia tweak will implement customizable start screens soon! Until then, if you are interested in StartDial, it is available for FREE via Cydia on the ModMyi repo!

Note: This Cydia tweak will work on the 3xx firmware all the way to the iOS4.2.1 firmware and above!