Have you ever been annoyed when you download a new app from the AppStore, only to find that it’s icon is not compatible with your Retina display? I know for one I have, and so when I heard about a new tweak called RetinaAppIcons, I was thrilled to finally find a solution to this problem. RetinaAppIcons is a tweak that will dynamically fix the this problem by replacing your pixelated icons, with vibrant new Retina display compatible icons. Take a look for yourself… 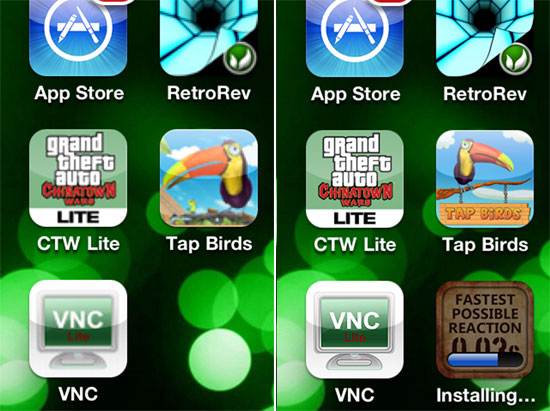 If this sounds like a problem you are facing, then what better way to solve it than with the RetinaAppIcons tweak. It definitely beats having to SHSH individual retina display compatible icons; and if you are skeptical about this tweak working, don’t be. This tweak is guaranteed to replace every pixelated app icon, and if for some reason it does not, you can email the developers to fix any errors that occur.

If RetinaAppIcons seems like the tweak for you, it is available through the Cydia Store for a price of $0.99! Grab it now.

EightKeys: Change The Way You Type

Today a new tweak was released into Cydia that will change the way you type on your iDevice. It’s typing concept is that there is 8 large keys shown when you are going to type something, and each of the eight keys when clicked leads you to individual letters. Example: One large key will show ERUQ, and when you click that key you will then be shown smaller keys with those letters. Personally when I installed EightKeys I was expecting something a little bit different, and after trying to get used to the new typing experience, I found it difficult. I unfortunately uninstalled the tweak for this reason, but if you want to experience a new way to type on your iDevice, I suggest that you try out EightKeys. 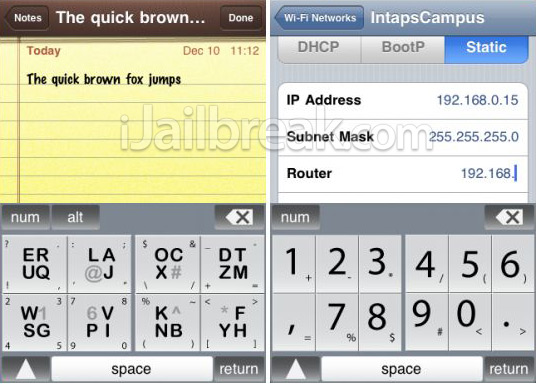 The tweak comes with the following features:

If you are interested in EightKeys, it is available free via the BigBoss repo. Let us know if you liked the new typing experience.

A new tweak is being developed by the creator of Barrel to add a spiral like effect to your SpringBoard. This means that all of your apps will be transformed into a spiral like staircase. Right now the tweak is in early beta and the developer warns us that this tweak is very buggy. If you are interested however in testing the IconSpiral tweak out, you can snagg a free beta version from the developers private repo. Before we give you the repo, please check this tweak out in action first… (Skip to 1:35, to see the tweak).

If you watched the video above and still want to try out this tweak on your iDevice, all you will need to do is add this repo to your iDevice.

Just a quick note – Before you install IconSpiral, the developer warns us that you will have to uninstall Barrel first, and probably parallax/infiniboard. Let us know your thoughts on the iconspiral tweak!

Lots of new handy tweak are being developed,  and one new tweak has just hit Cydia is called SBSwitcher! This tweak will allow you to bring the functionality and power of SBSettings into a new area of your iDevice. Meaning that you can access all of your handy toggles through an new user interface; and in this case you will be interacting with the AppSwticher interface. As your toggles will be transferred to the AppSwitcher bar upon installation, you can even access your toggles through your lockscreen. 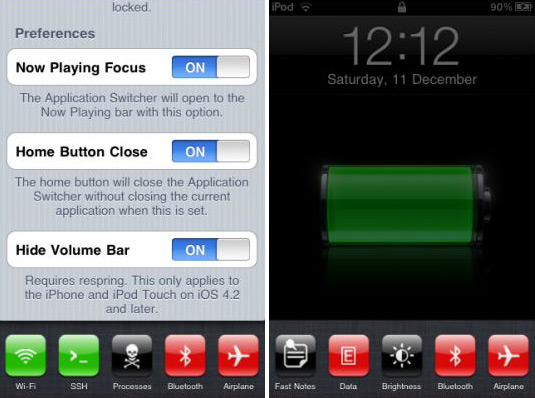 If you are interested in this new SBSettings tweak, it is available through the Cydia store for a price of $2.99! Now I know a lot of you are probably thinking, $2.99 that is an outrage! To be honest even we think the price is a little high, but regardless of this tweaks price. If you have a spare $3 to spend, this new tweak for SBSettings is quite useful! You see, SBSwitcher really makes SBSettings feel like it is a default part of your iDevice. With the plain old SBSettings tweak, it is extremely easy to tell that this is not something that was intended for your iDevice. With SBSwitcher installed though, SBSettings really feels like it is native to your iDevice.

Let us know your thoughts on SBSwtitcher for your iDevice!