The drop test involved dropping both phones against an outdoor cobblestone floor, which is a hard abrasive surface; not something you’d want a premium smartphone to land on. The drops occurred at various heights, from pocket level, chest height, and at the ear.

The Samsung Galaxy S III received minor damage at the edge from a pocket-level drop, multiple spiderweb cracks at chest height, and the impact covered the length of the display in cracks from the ear-level impact. The battery cover fell off from the ear-level drop, though the phone remained functional. The iPhone withstood the same drops with little more than cosmetic scuffs to the antenna band.

Cosmetic scrapes look more dramatic on the black version, because the dyed surface layer looks different than the anodized metal underneath. The white iPhone 5 may hide the scratches better. 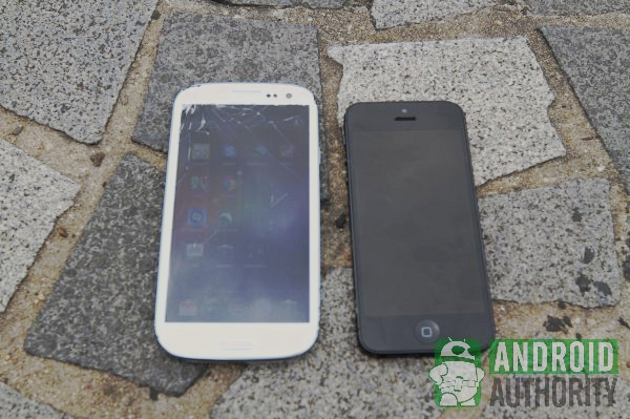 Now if only it wasn’t so easy to scuff the metal finish.

Kudos to Android Authority for complementing the iPhone 5 as an “iron-clad device.” (Aluminum, actually.) While drop tests aren’t often the first consideration when it comes to a choice of phone, it’s reassuring to know your phone can take a punch or two without a case. That said, keep in mind that the phone isn’t completely indestructible.

Did you expect the iPhone 5 to hold up better in a drop test than the Samsung Galaxy S III? Share your thoughts in the comments section below.