There are pros and cons for having a phone’s chassis made out of premium materials such as metal and glass. The iPhone 5 feels great to hold, and while it is supposed to be fairly durable, any glass can only hold up to so much force. Plastics, such as the Samsung Galaxy S III’s polycarbonate casing, are more difficult to damage or permanently deform, but feel like they’re made of plastic. The real question is “How much punishment can the new iPhone take?”

You’ll be happy to hear that, at least in IFixYouri’s test, it takes a lot of punishment to break the iPhone 5’s glass. So much so that the metal band around the chassis deformed before the front glass plate showed any sign of damage. Keep in mind that this is, of course, an anecdoatal test with a sample size of one phone. A more comprehensive sampling of iPhone 5’s could get expensive, as the 16GB phones are $649 without a carrier.

Before dropping the phone, IFixYouri attempted to scuff the glass with keys and a razor blade. Scraping either against the glass by hand had no noticeable effect. It’s never a good idea to put your phone in the same pocket as your keys, but it can happen by accident so scuff resistance is good.

As for the actual drops, the iPhone 5 tested was also resistant. On a tile floor the iPhone 5 survived simulations of accidental drops, such as standing up with the phone lying on your lap or… somehow missing your pocket when you put your phone in your pants. The phone’s metal frame deformed “a bit” from a drop at shoulder height, though the screen itself was fine. The glass panel finally cracked when the phone was deliberately thrown at the ground. 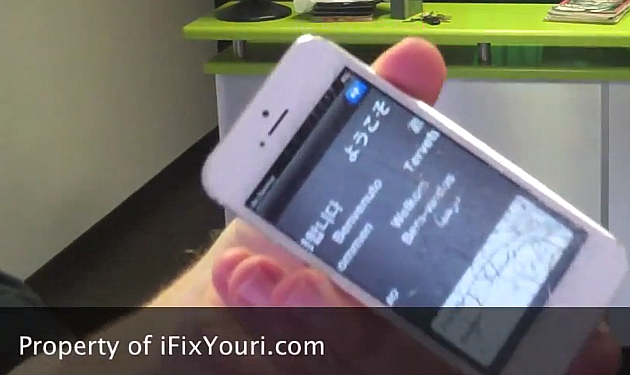 iFixYouri was ultimately able to produce a spiderweb crack by throwing their phone at the floor.

Short of using your phone for an indoor game of contact football, the iPhone 5 should be able to hold its own. What’s the worst phone drop that you’ve experienced? Did your phone survive? Share your thoughts in the comments section below.