In February HTC released the new “One” smartphone that sported a giant 4.7-inch high definition display and an aluminum body. Critics were quick to point to the fact that the HTC One’s body looked very similar to that of the iPhone. The question is, however, can the HTC One compare to the iPhone?

AndroidAuthority wanted to find this out and as such they did a drop test comparing the build quality of the iPhone 5 and the HTC One. Often times drop tests involve smartphones that are made with different materials, such as the Galaxy S III vs iPhone 5 drop test done awhile back. This time around though, the HTC One and iPhone 5 both have a lot of similarities, which should mean both handsets hold up somewhat the same.

The first drop test was done from waist height and unfortunately the iPhone had a bit of bad luck and landed on its face, which shattered the screen. The HTC One on the other hand, landed on it’s side, which actually broke one of the speaker grills off. The second test was from chest height and both devices hit the ground at similar angles, which resulted in fairly even scuffing on the corner of the devices.

On the third and final test from head height, the iPhone once again took a beating, landing on its display. The HTC One once again landed in a better position and remained unscathed compared to its rival. Not satisfied, one more test was done dropping the HTC One and iPhone from over head-height, which finally shattered the HTC One’s screen as well. 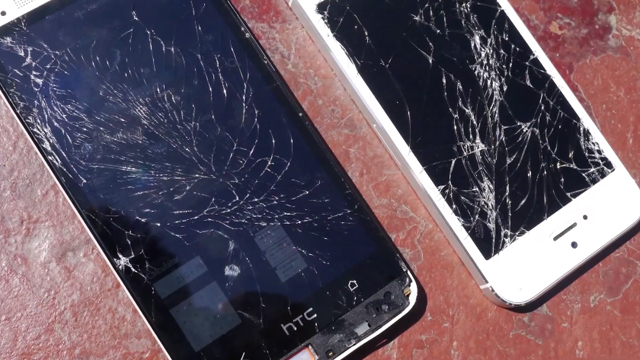 At the end of the drop test both devices looked like they had been through war, but despite all the damage both devices worked, which shows you how well they were made. Obviously the shattered screens pose a risk to safety, but it proves that better build quality means a stronger device.