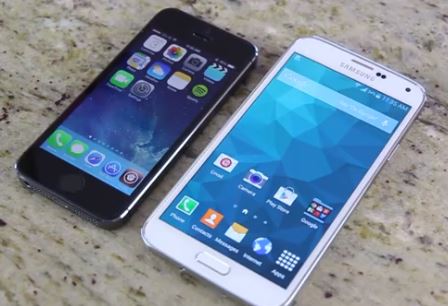 The Samsung Galaxy S5 isn’t out yet, it is scheduled to be available across the world starting April 11th. This video, uploaded by iCrackUriDevice, shows us how different the fingerprint scanners on the Galaxy S5 and the iPhone 5s are.

Apple’s TouchID scanner on the iPhone 5s simply requires you to place your finger on the Home button and voila, you’re through. You can also use the TouchID to authorize App Store or iTunes purchases. The Galaxy S5’s fingerprint scanner requires the user to swipe down on the Home button, which doesn’t work as great nor is as simple as Apple’s hold and go. You can however, authorize PayPal payments with the Galaxy S5 scanner and it can also be used in third-party apps. Check out the full comparison video below:

As seen in the video, it’s almost impossible to use Samsung’s fingerprint scanner with one hand, plus it doesn’t recognize your finger if it’s not held straight over the Home button. The TouchID is much simpler to use, and it can recognize you in any orientation. Jaibreak your iPhone 5s and you’ll be able to use that TouchID to do a lot more. Perhaps we’ll see some cool stuff in iOS 8?

What did you make of this comparison? Don’t you think the iPhone 5s TouchID scanner is much easier to use and works better than the Galaxy S5 scanner?