For fans of RowMote who have updated their Apple TV to the 5.2 firmware to take advantage of the new Untethered Jailbreak, you will be glad to know FireCore has mentioned that the popular trackpad and remote app is now compatible with the latest iOS iteration for the Apple TV.

RowMote is a neat little application that packs a lot of functionality. Its mantra is simple “why carry another device around just to control your computer or Apple TV?” Chances are you already have an iPhone, iPod Touch or iPad around with you, so why not use that as your remote or trackpad? 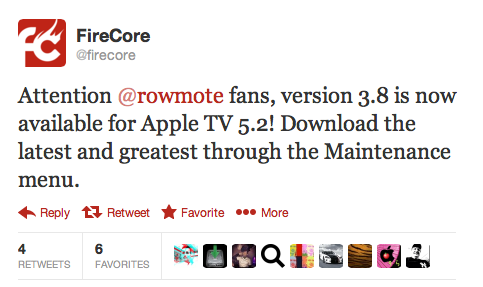 If you have a Jailbroken Apple TV then you have to take advantage of RowMote! The normal version is available on the App Store for only $0.99 and the Pro version that lets you use your iOS device as a trackpad is available for only $4.99.

As for all of you curious cats wondering if there is a status update on the 3rd generation Apple TV Jailbreak you will be disappointed to hear that nothing new has been said. The Evad3rs mentioned that their Evasi0n exploit was not compatible with the Apple TV Jailbreak, and although they mentioned they might have found a start to a loophole, nothing has developed since. It is unfortunately looking dim for the 3rd generation Apple TV.