No Screenshot Flash: Disable The Flash When Taking a Screenshot 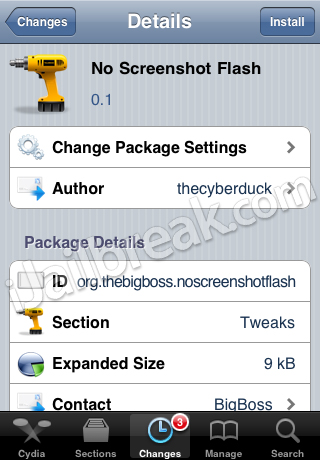 If you are interested in No ScreenShot Flash for your iDevice it is available free through Cydia!

We told you about a new tweak called No Screenshot Flash that took away the flash effect when you take a screenshot with your iPhone, iPad, iPod Touch. A new tweak has been released that also removes core iOS functionality. This tweak is called Undeletable Apps, and as its name suggests this tweak actually stops you from being able to delete applications off your iDevice.

Now the only reason I can see this being useful is if your iDevice is in the hands of a child where they could accidentally delete applications without realizing. However even in this situation I don’t know why you would give a child your iDevice. Regardless of what you use this tweak for, if this is functionality that you wish to have on your iDevice you can find it through the Cydia store for free! 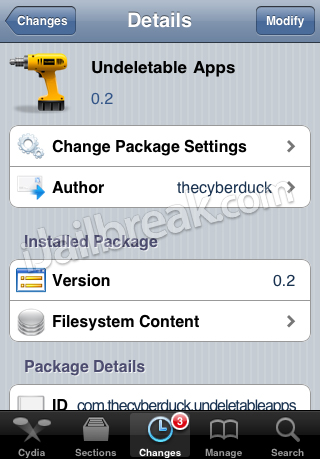 Now personally I actually did download this tweak quickly thinking it would have some kind of settings toggle, however to my disappointment it didn’t. To me for this tweak to be of any use it would need to have a fast toggle in the settings app, otherwise I consider this tweak to be of too much hassle to be useful. What are your thoughts on this tweak? Would you go out of your way to download it?

Have you ever wondered what it would be like to scroll through your SpringBoard pages horizontally? Well if you have, a brand new tweak was released into Cydia to rival Infinboard called Page2D. This tweak in a simplest description would be Infinboard with paging support; going into more depth this tweak allows you to scroll both horizontally and vertically across multiple pages. It really is a great tweak to have if you are someone with numerous apps, and want an easy solution to organize them.

If you watched the video of the tweak in action above you can see that Page2D is similar to Infiniboard, but with a new twist.

Setting up the tweak is a breeze as well, all you need to do is select the number of columns you want in the settings.app, and you can take your pages to another dimension. It is even compatible with Parallax; which for those of you who don’t know is another tweak by the same developer which enables a scrolling wallpaper on your SpringBoard. The only known tweak that Page2D is not yet compatible with is Barrel, but the developer is working on a solution.

Let us know if you decide to purchase Page2D through the Cydia store for $1.99, or if you are just going to settle with Infiniboard which currently costs only $0.99.

A new tweak was released into Cydia called FBphotoSave. This tweak does exactly as its name suggests and saves Facebook photos to your iDevice’s Camera Roll, at the best quality available. Now obviously this tweak would not be useful if you are using the mobile (web) version of Facebook, because you can do this already. However this is not the point of FBphotSave, as what this tweak actually lets you do is save photos directly inside the official Facebook.app. Providing you functionality that isn’t present on stock iOS devices.

Using the tweak is extremely easy, all you need to do is keep your finger pressed a few seconds on the photo to let the popup appear: after pressing the ‘Confirm’ button, you’ll find the photo in your Camera Roll. 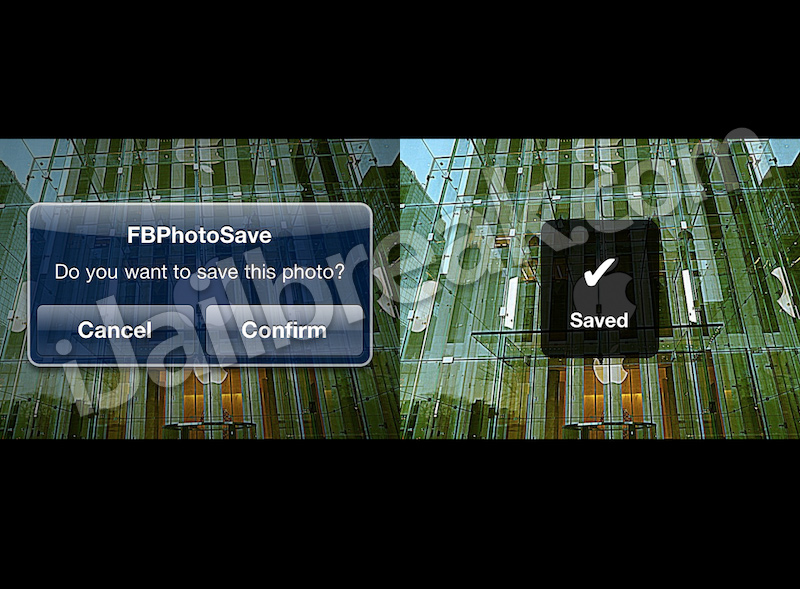 As you can see this is a very simple, but very useful if you are an avid Facebook user. If you are interested in FBphotoSave, you can find this tweak through the Cydia store for a price of $0.99.