Show My Touch is a tweak that has recently touched down on Cydia that is worth checking out if you want to add a subtle uniqueness to your iOS Device or make it easier for viewers to see your screen taps if you record your devices screen a lot. What the tweak does is make it so that every time you touch the screen a colourful indicator appears. 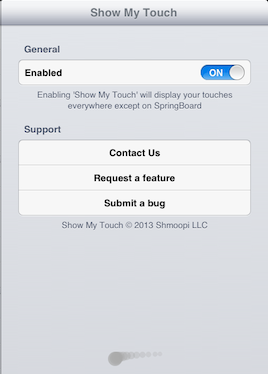 Sure this has been done before, but Show My Touch does differentiate itself from the crowd in the fact that your taps have a trailing tail along with its touch indicator.

You can even adjust the tail’s length from the tweak’s preferences and of course the indicators color. Other than that the only other thing in the Settings app is a killswitch.

I will point out that Show My Touch doesn’t work on the homescreen and this appears to be done on purpose. It would have been nice if the developer at least gave an option on whether or not to disable itself on the homescreen, but maybe this will come in a future update.

Those looking for a tweak that shows touch indicators system-wide on iOS should check out TouchPosé.

If you are interested in Show My Touch though it is available in the BigBoss repo for free. Be sure to drop us a line if you tried out the tweak in the comments.