For those that frequently take screenshots on your iPhone, iPod Touch or iPad you will be glad to know that there is now a way to pre-crop your screenshots so that you don’t need to do it using a photo editing program like PhotoShop.

A tweak called ScreenshotPlus was released recently that allows you to set an Activator action to bring up a new screenshot taking interface where you can pre-select the area of the screen you want to capture. There is 8 selection dots that can be manipulated to ensure you are only taking a screenshot of the specific area you want. 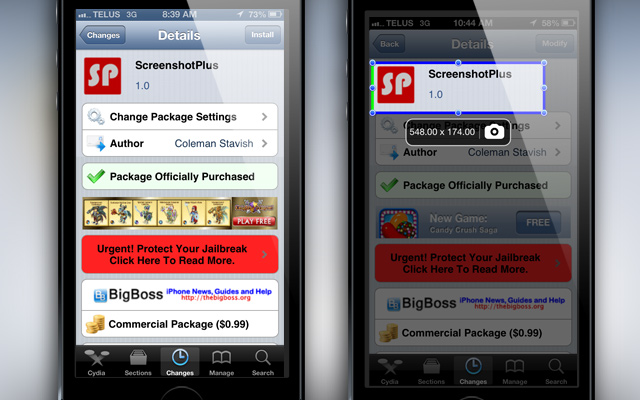 I tested out the tweak this morning and can confirm it works exactly as advertised. The cropped screenshots will be saved directly to your Camera Roll in their original resolution and can then be exported to your computer using an application like iPhoto.

The usefulness of this tweak cannot be underestimated!

ScreenshotPlus does have a Settings panel, but it only contains one toggle that is for showing the dimensions of your cropped screenshot. If you are interested ScreenshotPlus you can find it in the BigBoss repo for $0.99. It is compatible with both iOS 5 and iOS 6. Be sure to let us know what you think of the tweak in the comments section below.