Cydia, first released by Saurik a number of years ago, hasn’t really changed all that much. Since Cydia became mobile, instead of root, there’s finally a solution for this. Introducing Reflectrix, the modern Cydia.

Reflectrix is not a alternative to Cydia, it is essentially an addon into Cydia, however it looks extremely nice! It is clearly based upon the Apple App Store as it has a Top Charts section along with Featured Tweaks. For jail-breakers, this is essentially heaven, trust me. 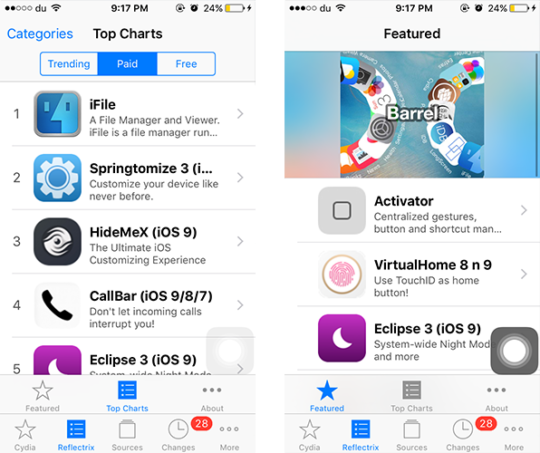 As you can see, there is a dedicated Reflectrix tab which then takes you into the Reflectrix experience, this is the same view within the Reflectrix app so it isn’t really necessary. Combined with very nice Featured Tweaks and a really sleek look for the Featured Apps along with a nice bit of caption information, it would be great if Cydia looked a little more like this!

A couple of minor downsides stop this from being perfect, however that is true with almost any Cydia tweaks. For a start, there is an unnecessary app for Reflectrix which would look a lot better within a Settings section within Cydia where you need to adjust anything necessary.

Unfortunately it’s currently in a beta process however fingers crossed, in the next couple of weeks it will be out and we can all try it and see if it lives up to its name.

What do you think about Reflectrix? Are you going to give it a shot or do you prefer the classic Cydia look? Leave a comment below.