QuickGestures is a Cydia tweak that was released a few days ago that I initially brushed off, but after digging deeper into the tweak I realized it is actually much more useful than I first thought!

Just what does the QuickGestures Cydia tweak do?

QuickGestures brings about new gestures to make doing certain tasks quicker inside the Contacts, Phone and Messages app, such as placing calls, sending a message or even an email. QuickGestures is actually based off gestures that have been implemented in Android that are extremely useful and increase your productivity.

The gestures are simple. There is swipe to the right, swipe to the left and long hold. Each of these three gestures can be configured to perform an action like placing a call, sending a message (SMS/iMessage), sending an email or making a FaceTime call. 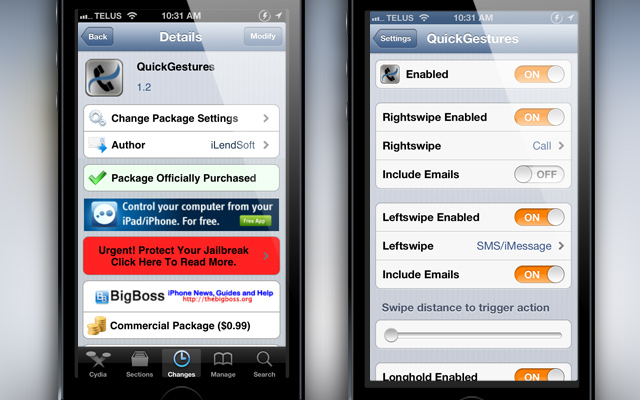 All of gestures can be configured in the Settings app though where you can also define the swipe distance to trigger the action, hide section headers and hide the search bar. I have played around with QuickGestures and I was blown away by how useful the tweak really is.

If you are interested in checking it out for yourself you can find it on the BigBoss repo for a price of $0.99. Be sure to let us know what you think of the tweak in the comments section.