The developer behind the most widely known SHSH blobs saving tool — TinyUmbrella — has just announced through his official blog that he will be hosting a private repo. In this repo will be any tweaks he developers that cannot be hosted on community repos. We are not talking about cracked app related tweaks, rather a tweak that allows you to download Pandora Songs called PandoraJelly.

NotCom actually tweeted a video of this tweak in action about a week ago and said it could never be released. As such I held off on reporting on it. Unfortunately the video has been taken down now, but even better you can download the tweak yourself by adding NotCom’s new private repo. At the time of writing this article I was able to access his repo fine, but I imagine as more sites report on it throughout the day it might start slowing down.

My personal repo is up. Be gentle. 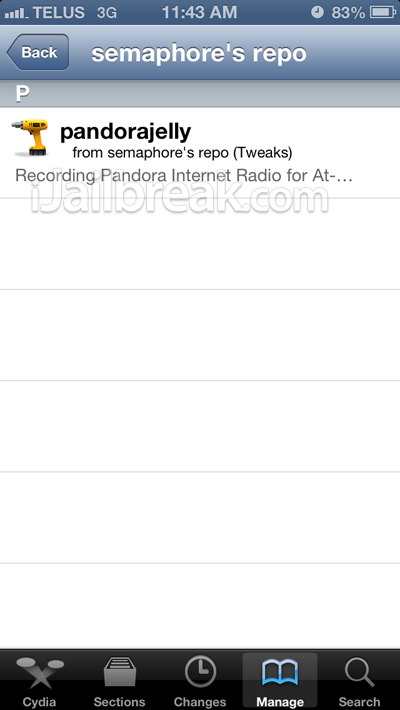 According to various tweets from NotCom the tweak will essentially download everything you listen to while streaming music from Pandora. Unfortunately I live in Canada and can’t use Pandora so I have not been able to verify its complete functionality. iJailbreak’s Allen Murphy is testing the tweak as we speak however, and will be providing his thoughts shortly.  NotCom has actually been nice enough to tweet us to alert us to the fact that PandoraJelly is a very safe tweak “ incidentally it’s very very safe. Though it may break TOS, it is not the blatant slap in the face that Pandora Downloader is.”

Let us know what you think of PandoraJelly in the comments section below.

Update #1: Allen has confirmed that this tweak doesn’t provide you any ability to choose which songs you download from Pandora (NotCom has mentioned on Twitter this functionality will indeed be coming soon though). Furthermore, it is not a separate app, it integrates directly into Pandora and saves the songs to the Music app. Another nice thing about PandoraJelly is that songs will sync over back to your iTunes library on your computer.

Update #2: The tweak has been renamed Pandy.