As rather than just having a list of names for your group conversation you could name it something for fitting. For example if you had a group chat going with colleagues, friends and also family it would get confusing figuring out which conversation is which because you are only displayed names of people in that conversation. 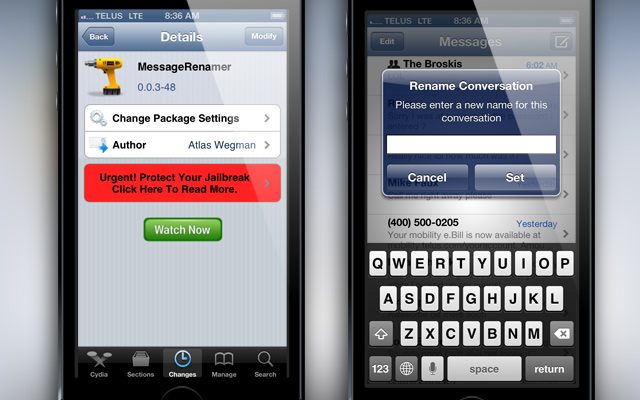 With MessageRenamer though you could actually name those conversations Work, Friends and Family, however, and instantly know which conversation is which without guessing.

Renaming conversations with MessageRenamer is simple and all you do is tap and hold a conversation you want to rename and you will see a pop-up appear like the copy and paste dialog. There will be 3 options in this pop-up, Rename, Reset and Cancel. Tapping rename will obviously allow you to rename the conversation, reset allows you to set the name back to default and cancel will… exit out of the pop-up.

There is no settings associated with MessageRenamer, you simply install and it works as advertised. Despite being a very simple tweak I definitely suggest you check it out. It is available for free on the BigBoss repo.

Let us know what you think of it in the comments section below.