You will find many Cydia tweaks to customize the Lockscreen of your iOS device, add custom unlock animations, logos and more. Here’s a new Cydia tweak that adds a bunch of unlock animations when unlocking your iPhone, iPod Touch or iPad. This tweak is very similar to UnlockFX, but also adds 4 custom gestures to unlock and is called iUnlock. 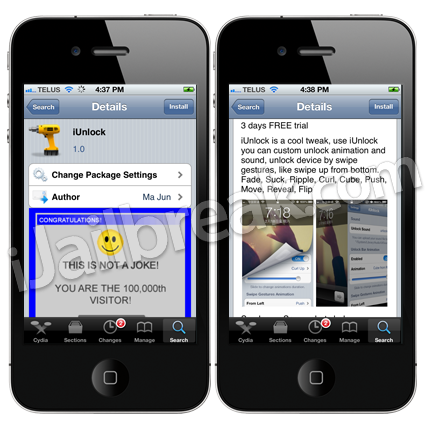 The iUnlock Cydia tweak has some cool unlock animations that will definitely make the unlocking process more fun. I especially enjoyed the ripple and suck effects. You can even add 4 different gestures to unlock your iDevice, such as push to the left or right or pull from the bottom or top. Another feature of this tweak is that you can add custom unlock sounds from a big list of sounds. You can also control the speed of the animation!

iUnlock is very similar to UnlockFX, but the latter doesn’t give users a 3 day free trial. It is currently available in the BigBoss repo. You can try the tweak for 3 days and if you like it, you can buy the license for $1.99. So, as you have nothing to lose, try out this app and let us know which tweak is better in your opinion in the comments section below. Would you go for UnlockFX or iUnlock?