Would you like to update the stock Notes application to adopt the flat style found throughout iOS7, and enable a black keyboard everywhere on your iDevice?

If you haven’t already noticed, the stock Notes application has a textured background, while it seems like all the other applications found throughout iOS 7 are flat and white, example; Settings, Messages, Clock, etc.

If you notice the difference, would you like a little more native and consistent look between the applications found in iOS 7?

Then take a look at Flat Notes. It’s a free tweak, developed by Harlan Haskins which utilizes the flat style found throughout the operating system. There are no options to configure after installation. The tweak only changes the background and nothing else. 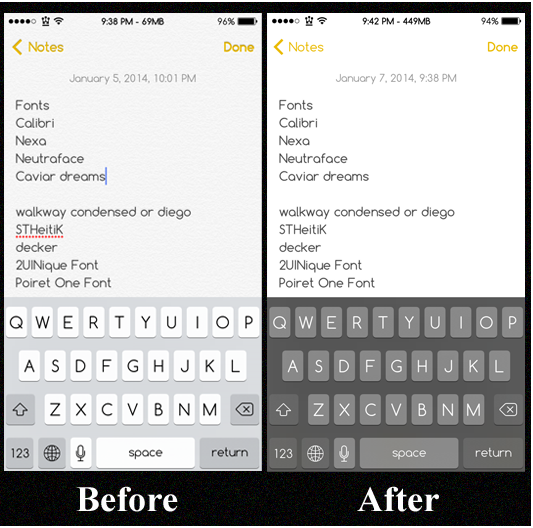 The developer has noted, there will be a future update to fix the issue which may cause the letterpress effect not to go away when editing an existing note.

Next up is a free tweak named Bloard, developed by the team GN-OS which enables a black keyboard throughout iOS 7. Even though the stock keyboard is white, sometimes it changes to a black keyboard depending on the interface and application. If you would like to have a black keyboard everywhere, then this is the tweak for you.

Some think having a black keyboard is sexier and some tend to think it’s easier on their eyes. The tweak gives you the option to disable the tweak in its preference pane found in general Settings so that you can go back to the standard white keyboard look if you choose to do so.

Both the tweaks can be found on the BigBoss repository, we hope you enjoy them and and let us know what you think of the tweaks in the comments.

P.S. The font being used in the screenshots above is called Comfortaa.