One often under appreciated feature of iOS is its proximity sensor and how it enables the screen to black out automatically when it gets close to your face during a phone call. This ensures that you don’ accidentally tap any buttons while you are talking on the phone.

If you’re not holding the phone like the proximity sensor expects, however, the screen stays visible. This can be both a blessing and a curse, as it is sometimes convenient, but at the same time easy to mess up the call and tap a button you didn’t mean to. 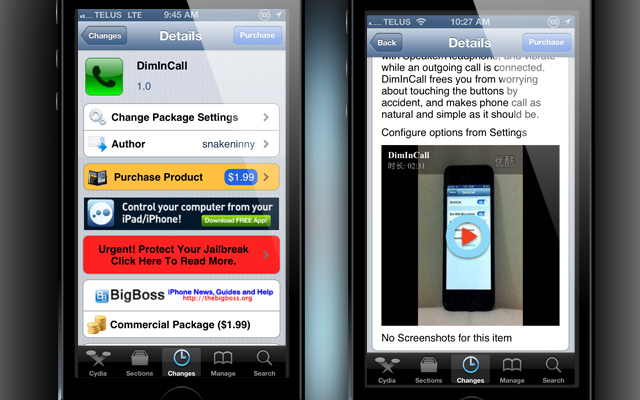 If you would place it in the latter category, then you may want to check out the newly released DimInCall Cydia tweak. This tweak makes it so that the screen shuts off immediately after a call connection is established and you can light the screen back up again by simply pressing the home or lock button. It will even turn back on automatically when someone hangs up a call.

The main goal of the DimInCall Cydia tweak is to make it so you never have to worry about touching the dialler buttons by accident. Its developer states that it makes phone calls as natural and simple as they should be.

If you are interested in the DimInCall Cydia tweak you can find it in the BigBoss repo for $1.99. Let us know what you think of the tweak in the comments section below.