Apple loses another incredible app to Cydia. A while back, we told you about WiFiSync, an awesome app for iPhone and iPod Touch that allows you to wirelessly sync your device over your home WiFi network. At that time, the app was just being submitted to Apple, for release in the App Store. Just as we, predicted, it was shot down by Apple. Not to fear! Greg Hughes, creator of WiFiSync, has released his app in Cydia!

WiFiSync is compatible on iPhone and iPod Touch, but does not support iPad, yet. You also need a client running on your computer, which is Mac only, right now. There is a Windows version coming soon. To get WiFiSync, you’ll need to have your device jailbroken, which can be easily done with Spirit. It’s gonna cost ya $10, but in my mind, it is worth it. I bought it! Just open up Cydia, go to Search, and type in WiFiSync. It is in the BigBoss repo.

Once you have downloaded WiFiSync on your device, you need to install the WiFiSync client for your Mac. You can get it (the file has been removed). It runs in the background, and you can see an icon in your status bar. It wil be black when not in use, red when accepting a new connection, and green when successfully connected.

If you click on the icon, you have a few options. I recommend disabling the back up. It makes syncing much faster.

To connect your device wirelessly, make sure the WiFiSync client is running on your computer, and open the app on your device. The app will say it is searching for computers on your network that are running the client. When it finds the right computer, it will ask you if you want to pair the device with the computer. You will see a similar message on the computer. Agree to both, and you’ll be syncing wirelessly to iTunes! 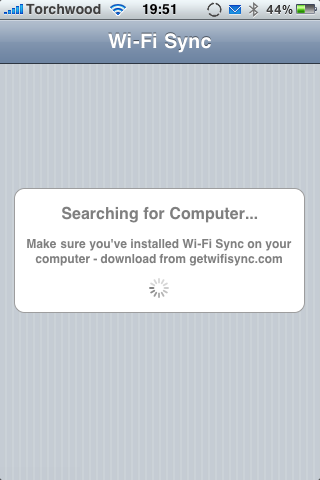 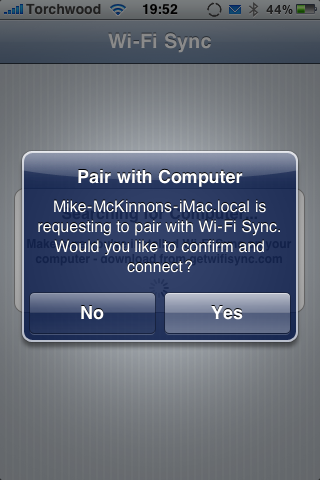 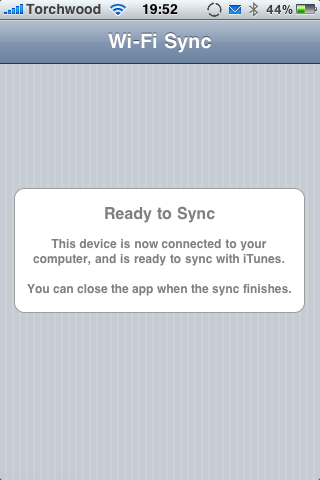 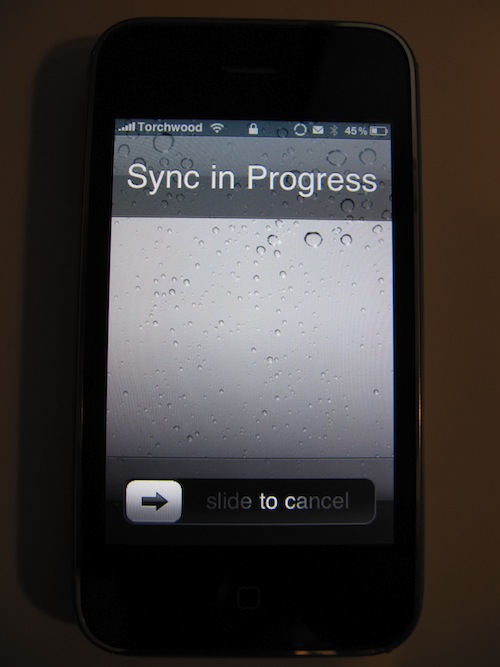 Your device should have the familiar “Sync in Progress” screen, minus the battery. It is a little weird not seeing the battery on this screen, but you are not physically connected to your computer, so you cannot charge your device this way. Although, technologically impossible with the iPhone, that would be great!

Depending on your home WiFi network, the sync goes pretty quick. In my case I couldn’t really tell the difference between WiFiSync and a regular USB sync. It easily transferred music, apps I had purchased, newly downloaded video podcasts, and it will transfer anything you normally would, via USB. Obviously, larger files (like video) take longer to sync. This will eat up your device’s battery a bit, but no more than anything else you might do over WiFi. If your sync takes a while, it will use more battery life.

The client that runs on your computer, in the background, is not noticeable, at all. Uses barely any memory at all, and only when it’s syncing your device.

I don’t have much negative to say about this app. If you have the back up enabled, the sync can take quite a while. Almost seems like it is not communicating properly, at times, but I’ve had that issue over USB, as well. Even though WiFiSync accomplishes an amazing task, the app itself, is pretty bare bones. It would be cool if in a future update we were able to wirelessly manage playlists and libraries, so we didn’t need to go to the computer, at all. I also thought, it might be nice to have the option for your device to automatically sync, when it detected you were connected to your home network. Now that, the developer doesn’t have his hands tied by Apple’s strict rules, maybe we’ll see more in future updates.

Greg Hughes confirmed iPad support is coming, and has posted a warning to people using a cracked version of the app, on Twitter:

I wouldn’t try a cracked version, if I were you. It knows. :)

To answer some Q’s: Yes, Apple rejected the app. iPad support will be a free update. Cracked users: keep your iTunes library backed up…

Here’s a video of the app in action:

Overall, I would recommend this app. The price tag of $9.99 may be pricey for some, but it was worth it to me.