We have been talking about the RedD00r custom iOS 5 firmware for awhile now on iJailbreak, but this time we actually have some good news and evidence that RedD00r is nearing a public release. You see, one of the main developers of RedD00r has recently released a video showcasing an alpha version of RedD00r running on an iPod Touch 2G (MC).

By watching the video one can see that RedD00r featured an easy to use installation wizard, and does indeed bring the iOS 5 look and feel to the iOS 4 firmware generation. The biggest question though I am sure people have who are not familiar with RedD00r is why is it useful and what is the difference between WhiteD00r and RedD00r. 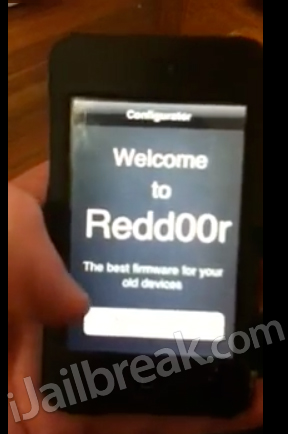 Although not all the features of iOS 5 are brought over with the RedD00r and WhiteD00r custom firmwares it is still the only way to enjoy some of the extra functionality Apple excluded older generation iOS devices from having. The features that these custom firmwares do bring to the table however, include custom backgrounds (wallpapers), the semi transparent dock, new system sounds, new icons from iOS 5, multitasking, tap-to-focus camera, a special version of iCloud that uses DropBox and much more.

With the alpha version of RedD00r being demoed I am sure we can expect a public release within the next month or so. For further updates please keep your eyes on iJailbreak and also the RedD00r Facebook page. Are you getting excited for RedD00r? Share your responses and further thoughts in the comments section below.