A couple of days ago a developer named Eric Day developed an application that brings Siri dictation to older iOS devices running the iOS 5 firmware. Even though it has been removed from the Cydia Store due to Nuance, the company that makes the voice recognition technology in Siri0us, who refused to sell a license to use its offerings in the program. If you are interested, you can still download the Siri0us Cydia tweak from the following source:

Note: Like adding any other source in Cydia, go to the manage tab. Press Sources, then press Edit on the right and Add on the left corner. Then Enter apt.if0rce.com . Note that the “o” in if0rce, is a “0” (the number zero).

Once Cydia has reloaded the sources. Go into the apt.if0rce.com source, scroll to the bottom and you should find Siri0us. Install it now. 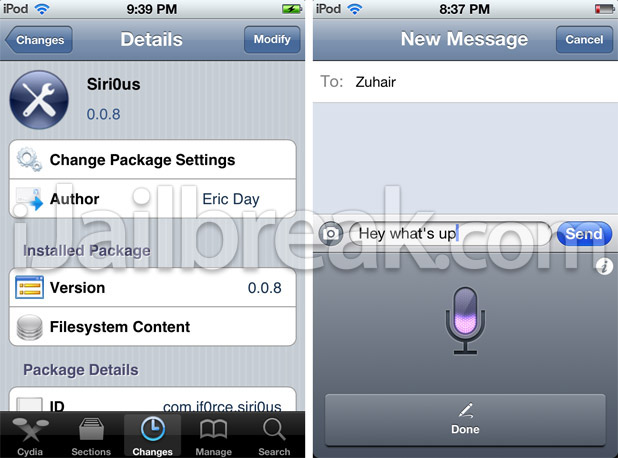 After you respring your device you should see a Siri microphone icon on your keyboard. Press it, wait for a second, then speak to it. Sir0us uses the same technology used in the actual Siri in the iPhone 4S.

Warning: If your device gets into a respring loop, DO NOT restore! Use iFunBox/iPhone Explorer/SSH to remove /System/Library/PrivateFrameworks/AssistantServices.framework from your device.

NOTE: You might have to remove any previous useless Siri GUI port.

According to which is the developer’s website it supports the following languages.

Lets all hope that Eric Day will be able to keep Siri0us alive for us. Siri0us is really good!

Update #1: The Siri0us Cydia package was removed from the repo mentioned in this article. You will need to add the following repo http://smolk.myrepospace.com/ instead to your iPhone, iPod Touch or iPad.