Sometimes you find a Twitter client that works really well, but you don’t like the colors the developers chose for it. Maybe the color choice really clashes with your theme of choice, maybe it’s too drab and boring, or maybe it just doesn’t feel like an impersonal off-the shelf app. There are a number of preset themes and skins available for popular Twitter clients like Tweetbot (just type Tweetbot into Cydia’s search), but what if you want a Twitter client with the perfect color scheme.

Customize Twitter Clients allows users to set the UI element colors in Twitter apps, so far including Tweetbot, TweetList, and Twitterific. These UI elements include text, the side bar, buttons, and background color; there are dozens of options to choose from. For certain UI elements such as user-name and date stamps, you can even set the colors to random. What’s more, the tweak is ‘smart’ enough to know if you don’t have one of the programs installed and won’t include customization options for that app.

The tweak did have a somewhat startling (but not necessarily malicious) side effect while I was installing it. It made my iPad ‘speak’ an introductory message, warning me not to pirate the app (I installed the proper tweak through the BigBoss repository), which is something I haven’t seen before. As I failed to notice, it turns out that Customize Twitter Clients is another one of those commercial Cydia tweaks that accepts payment through PayPal instead of the Cydia store. The tweak costs $2. 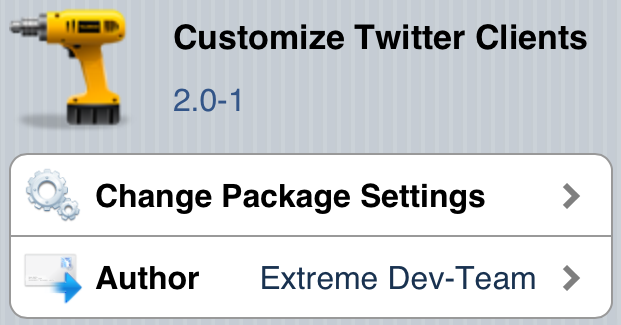 You do have many free options for customizing your Twitter clients, but if you want to have an unparalleled level of control, Customize Twitter Clients isn’t a bad pick.

What would you change about your favorite twitter client? Share your thoughts in the comments section below.