Nowadays when someone says jailbreak they think of Cydia, WinterBoard themes, unlocking and many other great tweaks and modifications available through Cydia. If you have just gotten into the jailbreaking scene recently you will have taken all of this for granted, however it is important to know and realize that jailbreaking wasnt just invented over night. It has been the result of hard work and dedication by a bunch of hackers and developers alike.

One developer by the name of chpwn is an example of one of these key developers. He has created and developed many useful applications and mods that have really benefited the jailbreaking community. He has helped create the very popular multitasking applications Proswitcher, he created Infinidock and just recently the application Infiniboard… 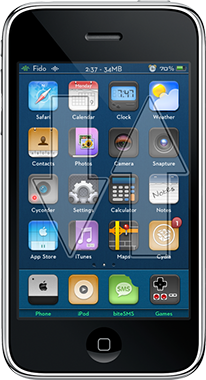 Simply drag as many apps as you want to have displayed on one page and you can view them by either flicking your finger in an up or down motion. I have personally played around with Infiniboard for awhile now and I think I will continue using it because it makes scrolling through many apps an easier and faster process.

The only downfall to Infiniboard is that it is a commercial applications costing $1.99 on the Cydia App Store. Although it is defiantly worth the money if you are looking for a way to make scrolling through apps an easier and faster process. What do you think of Infiniboard and would you use this great tweak?