Apple has released iOS 9.1 to the public with several improvements, new features and bug fixes. The OTA update should be available for all those who have a compatible iPhone, iPod Touch or iPad. You should also receive a notification for the update on iTunes. 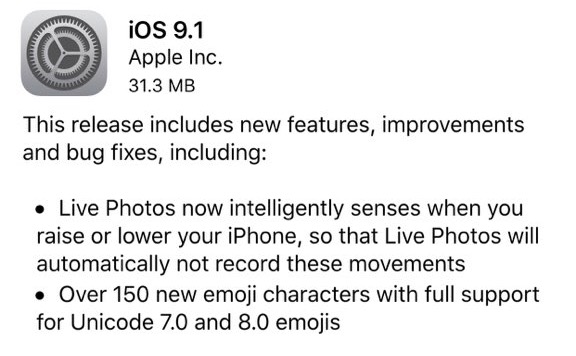 iOS 9.1 has been in beta for some time now and the final version includes all the features that were being tested. For example, the new update comes with over 150 new emojis. And on the new iPhone 6s and 6s Plus, the Live Photos feature can now tell if you’re raising or lowering your phone to avoid weird photos.

The new update also comes with several bug fixes and other stability and performance improvements. Apple’s iOS 9 launch did not go very well, there were several issues with iOS 9, most of which were fixed in iOS 9.0.2, but there were few more things that the company needed to fix.

Here’s the complete changelog for iOS 9.1:

If you’re jailbroken on iOS 9.0.2, it is imperative that you do not update to iOS 9.1. Apple has indeed patched the Pangu 9 jailbreak on iOS 9.1 and credits the PanguTeam for discovering two vulnerabilities.

Are you going to update to the iOS 9.1 firmware, or is a jailbreak more important right now? Let us know in the comments.