Roughly a week after the release of the PlayStation 4 and it looks like it already could have been Jailbroken by a hacker who goes by the alias of Reckz0r. The news comes from GrahamCluley who shared Reckz0r’s PasteBin file that essentially explains the whole process in a step-by-step format.

The Jailbreak could allow for pirated games, customizations of the UI of the PlayStation and just about anything else hackers can do with root access.

Reckz0r shouldn’t be credited with developing the Jailbreak in its entirety, however, he says he did not find the vulnerability in the PlayStation 4 himself or create the exploit. Instead he credits a Brazilian console-hacking forum. What he did do though is provide clear instructions on how anyone can Jailbreak their PlayStation 4.

As you all know, PS4 runs Orbis OS, that is highly based on FreeBSD (which is a opensource operating system), and as the PS4 is closely identical to a PC, I guess you all knew that PS4 and the Xbox One will probably end up getting pwned soon, and now..its time.

Not many people have been able to verify whether this Jailbreak is 100% legit simply due to the fact not many people own the console yet, but some success has been reported.

Of course if you would like to Jailbreak your PlaySation 4 you better do it fast because Sony has been known to shut things down fast. Just take the GeoHot case for example. In fact, Reckz0r already posted a screenshot of a proposed conversation he had with the official PlayStation Twitter account, via direct message. 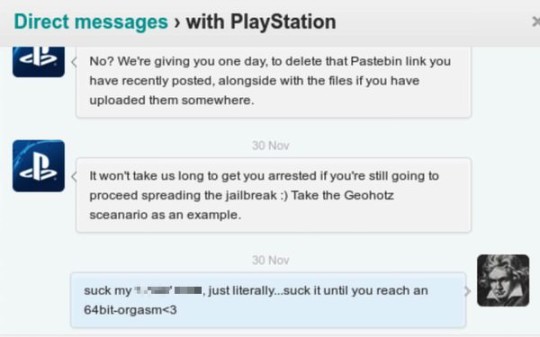 If you’re interested in Jailbreaking your PlayStation 4 click here to view the PasteBin file that contains the instructions. In case the file goes down they have also been pasted below:

***IMPORTANT***** – You need the DAY ONE Update to jailbreak the PS4, otherwise these files will be considered unrecognizable.

1. Create a folder on your USB storage device. This is where you’ll put the exploit.

2. Create a “SANDERPS4” folder. Inside that folder, create another folder named “EXP.”

3. Extract the PSORBISEXP.PUP file from the package, and save it in the EXP folder.

4. Make sure your PlayStation 4 is turned off.

5. Connect the USB storage device to your PlayStation 4, and press the power button for at least 7 seconds. The PlayStation 4 will start in Safe Mode.

8. If your PlayStation 4 doesn’t recognize the jailbreaking file, make sure that the folder and file names are correct.

Let us know if you have success with this Jailbreak in the comments section.