Previously we showed you how to update to the iOS 6 firmware on your iPhone, while preserving your baseband. This is obviously only useful for unlockers who rely on a specific baseband version to maintain their unlock. For those of you who use UltraSn0w, you were probably disappointed that is has not yet been updated for iOS 6 compatibility.

If you have been unlocking with UltraSn0w for some time now, you probably have gotten used to the fact that UltraSn0w updates can often times take weeks, if not months. As such, to tide you over until the official UltraSn0w for iOS 6 release, a package called UltraSn0w Fixer was created that will make UltraSn0w function on the iOS 6 firmware generation.

Update #1: Moments ago we told you that UltraSn0w Fixer was updated to be compatible with the iOS 6.0.1 firmware, and in case this is your first time using UltraSn0w Fixer we are providing a step-by-step tutorial. In this tutorial we will cover how to unlock your iPhone 4, 3GS, 3G on a compatible baseband running iOS 6.0.1. 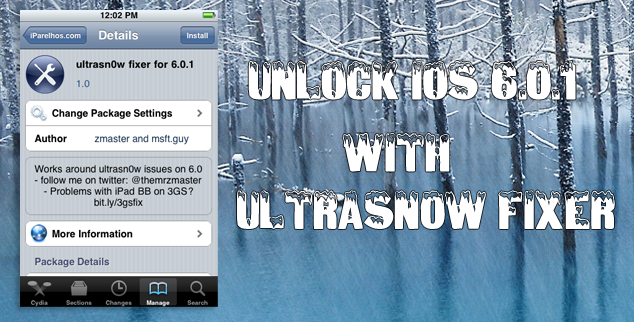 Step 1: You will need to jailbreak your iPhone 4 or iPhone 3G/3GS on iOS 6, iOS 6.0.1. For instructions on how to do this visit the How To Jailbreak section.

Step 2: Launch Cydia from your SpringBoard (homescreen), go into the Manage tab, Sources section, tap the Edit button and then the Add button. You will need to add iparelhos repository:

With both UltraSn0w and UltraSn0w Fixer installed you should now have an unlocked iPhone 4, iPhone 3GS or iPhone 3G on iOS 6 or iOS 6.0.1. Congratulations!

If you have any questions, comments or thoughts, please turn your attention to the comments section.