Announced today on EE’s official Twitter page, the brand new Pixel and Pixel XL phones by Google are only going to be available from EE starting out. Of course, it will be available on places such as eBay however this is definitely a major way for Google and EE to boost their sales. As EE is made up of T Mobile the connection is clear.

BREAKING NEWS: Pixel and Pixel XL phones by Google will only be available direct from EE, the UK’s fastest 4G network #MadeByGoogle

The brand new Pixel phones come packed with some great new technology which, Google aim will help beat the competition, mainly Samsung and Apple as they’re now running their own software, on their own hardware. Sound familiar *cough Apple*.

Sporting the new USB Type-C connector, an amazing new 12 MP camera, 4GB of RAM along with a astonishingly beautiful looking unibody with a great looking display, this device definitely has the potential to be a massive hit!

Combating the feared move over from platforms, Google have created a tool that lets people “transfer contacts, photos, videos, music, texts and even your iMessages.” The idea is you literally plug in the phones together and it will do all this, if it does that will definitely be cool and perhaps we’ll see a change in platforms from!

Google are also introducing their new fingerprint sensor, dubbed the ‘Pixel Imprint’ along with a metric tonne of other great new features.

Combined with this is the additional software extras that Google are including, attempting to truly revolutionize the Android phone platform. They’re allowing an unlimited, full resolution backup plan for all Pixel users so your photos are safely stored in the Cloud. As many, for as long as, you like. iCloud, take note! 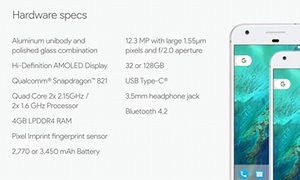 Also, unlike normal with Android where you have to wait for your network operator to release the software update, Google are making a ground breaking step within the Android platform to allow the updates to come straight from them via OTA packages, which means Pixel users will now always have the latest and greatest in software.

This is just a tiny taster of what’s now available including 24 hour live video tech support, astonishingly large batteries, fast charging, Virtual Reality compatibility and more, could this be the next flagship?

Leave a comment down below if you think this is going to be your next daily driver. If not, why? If you want to see more in-depth articles about the Pixel let us know!