With the iOS 5.1.1 Untethered Jailbreak being released recently in the form of Absinthe 2.0 there are nearly one million new Jailbroken iOS devices. I am sure one of the reasons why so many people Jailbroke their iPhone, iPod Touch or iPad was to get Siri functioning. Unfortunately the most popular methods of installing Siri on Jailbroken iOS devices, Spire is not compatible with the iOS 5.1.1 firmware. 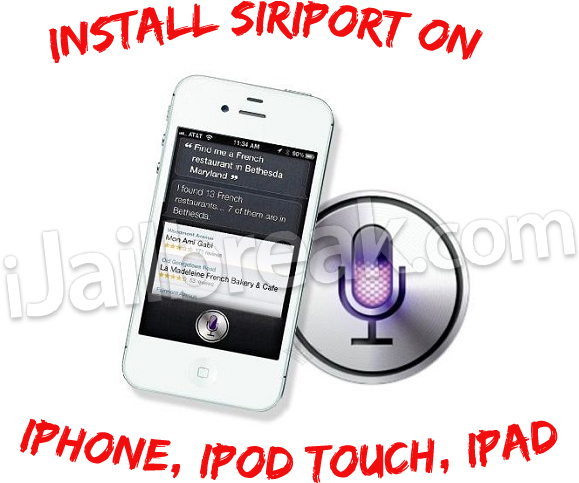 For those who are still wanting to get Siri on their older generation iOS device then you will be glad to know there is an alternative. This alternative is called SiriPort and will allow you to get Siri functioning without the need of a proxy server. Meaning you can use Apple’s personal assistant, Siri on the iPhone 4 (GSM, CDMA), iPhone 3GS, iPod Touch 4G, iPod Touch 3G and iPad 1G running the iOS 5.1.1 firmware without iPhone 4S activation keys.

SiriPort was recently updated to version 5.1.1-3 as well to support better connectivity and responsiveness. As such SiriPort really is one of your best options to get Siri fully functioning on older generation iOS devices. Thus, in this tutorial you will learn how to install SiriPort to your iPhone 4/3GS, iPod Touch 4G/3G or iPad 1G running the iOS 5.1.1 firmware.

WARNING: Ensure you back up your iOS device before following this how to guide. Although a lot of people have had success installing SiriPort it has been known to cause endless boot loops, which result in having to do a factory reset to your iPhone, iPod Touch or iPad. This actually happened to me when trying to install SiriPort on my iPhone 4 so proceed at your own discretion.

Step 1) – The first thing you will obviously need to do is Jailbreak your iPhone, iPod Touch or iPad Untethered on the iOS 5.1.1 firmware. For those of you who would like a helping hand with this please click here.

Step 2) – Next you will need to add the official SiriPort repo. To do this launch Cydia, go into the Manage tab, followed by the sources section and then tap Edit > Add and type in the following repository shown in the quoted area below:

Step 3) – With the repository successfully added go into Cydia’s Search tab and search for:

Step 4) – Once you see SiriPort (original) on the search results you will need to tap on it and install it to your iOS device. One thing to keep in mind before installing it however, is that it is a large package (nearly 100MB) so you will want to ensure you are connected to a Wi-Fi network.

Step 5) – With SiriPort now installed on your iOS device you will need to launch Safari and go to the following URL:

Step 7) – Now simply invoke Siri and say “Hi”. If Siri does not respond in a few minutes you will need to reboot and repeat this process until you get Siri to reply to you. Once Siri does reply to you it is working and you now have Siri functioning on your older generation iOS device running the iOS 5.1.1 firmware.

Note: SirPort is used by a lot of people and if you are not having any luck getting a response from Siri it could simply be because the SiriPort servers are overloaded.

If you followed all the steps correctly and met the requirements outlined previously you should have gotten Siri fully functioning on your iPhone, iPod Touch or iPad running the iOS 5.1.1 firmware. Please share your experience with SiriPort and any questions or further thoughts you may have in the comments section below.