So you need to check how many cycles you have been through with your iOS 7-running device?

iBatteryInfoPro is a Cydia tweak that helps you with the lacking features of iOS and preserves the usual battery you get before you jailbreak. 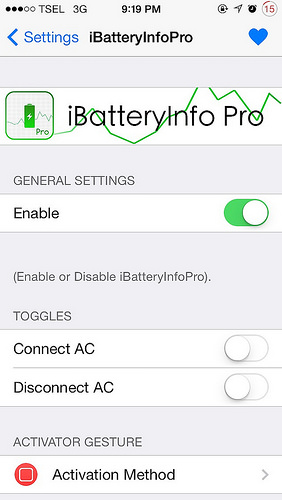 Most of its users (including myself) use iBatteryInfoPro to check the cycle count of the batteries installed on our devices and to maintain our battery life cycles. The tweak itself doesn’t have an icon on the home screen but it shows up under the Settings application.

The main features of this Cydia tweak is the ability to check how much maximum battery capacity is left that the battery can hold after degrading through time and how much mAh you’ve lost from day one.

Moreover, it has the ability to save the battery usage when you’re running low. By having the automated system turning off Bluetooth, Location Services and turning on Airplane Mode alongside with dimming the screen when your battery reaches certain level that can be adjusted easily with a slider. 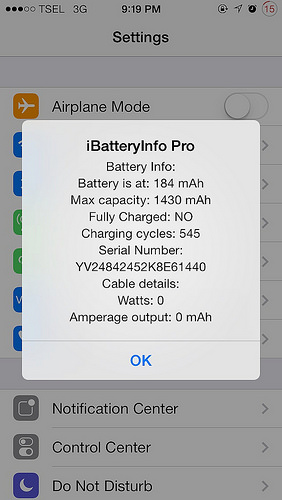 The integration with Activator makes it easier to display the battery data and the cable details with a tap or two. And the last but not least, iBatteryInfoPro will have the ability to remove the ‘unsupported cable’ charging errors but it is not available yet since it is on beta.

iBatteryInfoPro has its own website to collect and display the community’s battery data in which we can add with ours by tapping the Submit your battery data button on Data Sharing section.

All in all, iBatteryInfoPro is a great battery application that really shows your most accurate battery data and it sells less than one buck ($0.99) on BigBoss repo.