In such little time, this amazing port (H1Siri) that have gotten people extremely excited has been found to be illegal. Various famous members of the jail breaking community have already spoken out against this. There already were a lot of Siri ports for older iDevices but the method has never been a public method because it was illegal to.

The iPhone 4S Siri files are Apple’s copyright and are illegal to distribute. This means that the team that developed the H1Siri Cydia tweak have broken the law by making the tweak available to download. I know some people won’t mind violating the law, other developers such as Chpwn have voiced their disappointment that jailbreaking has become about copyright violation. 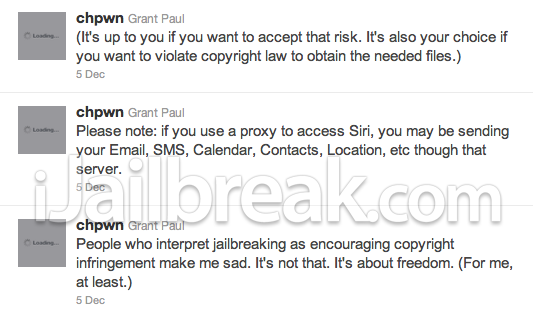 Besides from being a huge copyright violation. The H1Siri Cydia tweak will send your data to the developers private server then redirect the traffic to Apple’s server. Although this is a speculation, the developers can see emails, SMS and reminders etc requests Siri sends to you.

This tweak is illegal, it doesn’t work anymore and it gives the developer’s a lot of information about yourself. I do not recommend anybody using it even if it uses a new UDID.