ModMyi is reporting that SaurikIT has acquired Rock Your Phone Inc. This is a huge move for the jailbreak community, as Cydia and Rock app have been competitors for quite a while now. When Rock was first introduced they had their own extentions that conflicted with Saurik’s MobileSubstrate, making you choose which apps you wanted to install. Rock later adapted MobileSubstrate, but there was still competition in what premium apps were sold in each store. This is all about to change.

Here’s an excerpt of ModMyi’s article:

Details of the acquisition have not been made public, but here’s what it means to you: Rock.app will essentially dwindle away. There will be a transitional period for the next 10 days where users can purchase/download apps and licenses in Rock. After that, users will use their Cydia Store login to retrieve their purchased apps. The large majority of themes/apps from Rock will be moved over to Cydia (most are already there right now). Rock will have a notice on it’s first page, and APT updates will discontinue in the near future (so Rock would be useless even if you had it). I chatted with Mario Ciabarra (CEO and founder of Rock Your Phone) and he had this to say about the acquisition:

“It’s been a fun ride. We set out to change the landscape and I think we were very successful. I think we contributed to attracting more business professionals to the iPhone jailbreak community, and added some great functionality to the platform. The current transaction with Cydia is a great opportunity for us. We’re going to miss some of the excitement, but no reason for anyone to worry. I, personally, will be spending even more time in Intelliborn apps development (both existing and exciting new projects). A few months ago, Jay and I sat down together and we realized, I enjoyed making apps more (and was better at it), while Jay enjoys providing platform functionality. It was a win-win for both groups and we’re excited about the transition.” 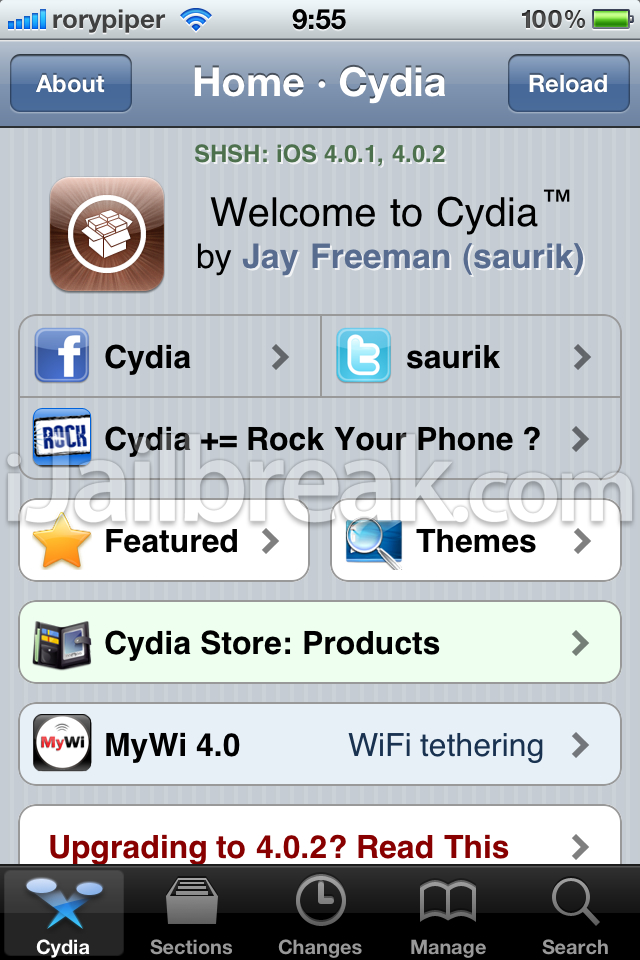 So, what does this mean to us, the end user? Saurik has posted a great Q&A (with himself :P) in Cydia. This should help you understand what’s going to happen:

A: Yes? ;P Well, sort of; I’d describe what happened more as a strategic reorganization of the two companies.

Q: What does that even mean? That makes no sense. What is happening?

A: The key thing to realize is that Intelliborn, the company that brought you such products as IntelliScreen and MyWi, are the same developers who created Rock Your Phone.

Unfortunately, due to some early miscommunication, rather than us being in a position where we were cooperating on platforms like Cydia, we ended up spending most of our time competing with each other over the course of the last two years.

This was not good: Rock ended up wasting a ton of effort reimplementing Cydia, while SaurikIT got dragged into an “apps battle” to compete with the Rock exclusives from Intelliborn.

The primary goal of this new world, then, is to put everyone “back on task”, with a true collaboration rather than this incessant competition.

Q: OK, so what does that mean for me, the end user of all your software?

A: If everything goes well, it means that you will have at least twice as much awesome: instead of two groups of people fighting with each other over core functionality, more time is going to be spent expanding the platform in new directions.

Q: But… Rock was awesome! It was so much faster than Cydia it hurts. :(

A: Unfortunately, Rock’s speed came from taking a few incorrect/dangerous shortcuts, which precipitated the event that really forced us to where we are now: an “essential upgrade” that was required for the Spirit jailbreak, which, when installed by Rock Your Phone, forced everyone to restore their devices and start over.

That said, we at SaurikIT are always trying to improve the speed of APT, the underlying package manager we use on the jailbroken iOS platform, and are now excited about our ability to concentrate on these platform issues full time, without interruption.

Q: Huh. Fair enough. But Rock had some really important features, like backups. What if I already have a backup saved in Rock Your Phone?

A: We are collaborating on this one (neat, huh? ;P), getting the backup feature into Cydia, and merging all of Rock Your Phone’s existing backups into the Cydia databases so they can be used from Cydia as easily as Rock.

Q: Is Cydia going to get any other improvements? (Maybe on the iPad?)

A: One thing we are trying to do is to bring more developers to work on Cydia itself. For example, chpwn, who has been of immense help with some of the newer jailbreaks, has recently been doing a lot of work on how the different views of Cydia are navigated, which will be in the next release.

Q: How about comments and ratings? Rock had those, right? (Right?)

A: SaurikIT is working on coordinating with the major repositories and developers (which includes Rock Your Phone) on how to best bring ratings into the Cydia package ecosystem.

We have been working on this for a while, and have had multiple false starts: comments were even tested and then pulled for some serious community issues they caused. We believe this thought and experiment is going to mean you will love the result.

Q: Can you at least let me filter out all of the themes in Cydia? There are way too many themes: themes suck.

A: Certainly. In fact, Cydia has had this feature for two years now! ;P

Simply click Sections, then Edit, and turn off anything you don’t want, like themes, ringtones, or fun itself.

Q: How about all of the software I bought in Rock? Will those licenses transfer over with my Rock ID?

A: Yep! We’ve been working really hard to make this work correctly, and although there are a few corner cases that still need to be handled, there’s really not much work left to be done.

Q: Do I have any other questions?

So, that should answer a bunch of your questions about this “merger”. We’ll bring you more details as we learn them. The Rock app will eventually go away, so if you don’t have an account set up for the Cydia Store, get to it!